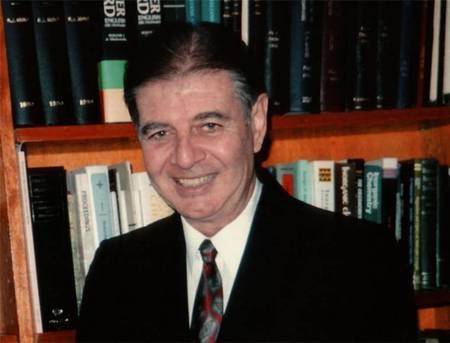 Dimitrios James Aronis ('Beys'), who was born in Aroniadika, Kythera, came to Australia in 1908. In 1916 he joined some of his brothers and sisters in Boston, USA, but returned to Sydney in 1919. In 1923 Stamatina Aronis ('Papadominakos') also from Aroniadika, came to Sydney. They married in 1926 in Townsville and thereafter opened up the Central Cafe in Mackay, north Queensland, in 1928.

Dimitrios and Stamatina Aronis (Aroney) had one child, Manuel James (Dimitrios), born in 1933, who grew up in Mackay where he did his primary and high schooling. In 1951 Manuel was awarded a Queensland Open Scholarship, given to the top 25 students in the State, and a Commonwealth Scholarship.

He then went to the University of Sydney where he gained a B.Sc. with 1st Class Honours (in Physical Organic Chemistry). He completed a higher degree, M.Sc., and in 1961 a further degree, Doctor of Philosophy (Ph.D.), in Polarity, Polarisability and Molecular Structure. He was made a Teaching Fellow in 1955 and in 1961 a tenured lecturer in Chemistry at the University of Sydney. Manuel has been there ever since and worked his way up the academic ladder. He is a Fellow of the Royal Australian Chemical Institute and a Fellow of the Royal Society of Chemistry (London). Professor Aroney is also a Member of the Australian Academy of Forensic Sciences.

During the 1970s and 1980s Manuel Aroney's involvement in the community increased enormously. As well as carrying out his University duties, being appointed Head of the School of Chemistry in 1977, a position he relinquished because of a severe health breakdown, he took on many other responsibilities, serving on non-government organisations and on four Federal Government commissions and boards.

In 1975 he was foundation member of the Ethnic Communities' Council of NSW. From 1977-81 he was appointed by the Federal Government as a member of the National Ethnic Broadcasting Advisory Council, charged with advising the Commonwealth Government on multilingual electronic media. From 1978-81 he served as one of four members of the first Board of the Federal Governments Special Broadcasting Service, which made ethnic radio permanentacross Australia and, with Bruce Gyngell, established the SBS television service.

During the 1980s Professor Aroney continued to be called upon to take an active part in the formation of policies affecting our community. From 1981-83 he was a member of the Australian Institute of Multicultural Affairs. The Institutes function was to formulate multicultural policies within the Australian context, to promote community understanding and acceptance, and the practical implementation of such policies in the community.

In 1983 Professor Aroney chaired a Selection Panel which assessed proposals from various institutions and ultimately selected the Australian National University to produce, as a bicentennial project, The Australian People - An Encyclopaedia of the Nation, its People and their Origins (ed. James Jupp).

During this decade, Professor Aroney's contributions to society were recognised by a number of awards. In 1980 he was granted the honour O.B.E. (Officer of the Most Excellent Order of the British Empire) for services to the University and to the community (awarded by the Queen), and in 1989 he was awarded the A.M. (Member of the Order of Australia) given for services to multiculturalism and the Greek community.

Throughout the 1990s this remarkable man continued to add to his list of achievements. In 1991 he was awarded the degree D.Sc., Doctor of Science, by the University of Sydney for outstanding contributions to international scientific research. This is the highest degree given by the University for research over a long period of time. Professor Aroney's particular field of study has been research into forces that bind atoms together in molecules, the behaviour of electrons in molecular systems, studied by a range of techniques of physics. He has published more than 140 research papers and reviews in prestigious international scientific journals and as well, a large number of conference papers and abstracts.

Professor Aroney has gained recognition for his achievements not only within Australia, but also within Greece. In 1982 he gained the very rare and prestigious honour of being elected Corresponding Member of the Academy of Athens, Greece, as a distinguished Professor of Science. ('Corresponding' means 'living outside of Athens.') In 1994 he was given the further great honour of being made an Honorary Doctor of Science of the University of Athens. In 1998 the President of the Hellenic Republic made him Commander of the Order of the Phoenix.

In October, 1996, Professor Aroney went to Athens representing the First Greek-Australian Museum Foundation, for talks with the Minister for Culture, Professor Evangelos Venizelos. He was able to secure an understanding in which the Ministry would send to Sydney, in the year 2000, original classical antiquities from various museums in Greece, but especially from the National Archaeological Museum in Athens.

This Committee, which Manuel Aroney now chairs, was able to bring together the Greek Minister for Culture, Premier Bob Carr and the Powerhouse Museum for what turned out to be a wonderful exhibition of Greek treasures never before let out of Greece, with an Olympics theme. During the negotiations Professor Aroney was rendered great assistance by Professor George Cassimatis, Professor of Law at the University of Athens.

Throughout his life Professor Aroney has also been greatly involved in the work of the Church. In 1972 he was given the title Archon of the Oecumenical Patriarchate of Constantinople for services to the Greek Orthodox Church in Australia. Since its inception in 1983, he has been on the Board of Governors of St Spyridon Greek Orthodox College at Kingsford and Maroubra, and from 1986, a member of the Student Selection Committee of the St Andrew's Greek Orthodox Theological College. He represented the Theological College in an Ecumenical tertiary institution called the Sydney College of Divinity, serving on the Council for about 8 years. He was recently made a Member of the ProviCare Foundation of the Archdiocese of Australia.

It deserves to be emphasised that Professor Aroney has had a very strong involvement with the Greek community and has been a member over the years of many Greek-Australian associations, including the Kytherian Brotherhood, AHEPA, the Castellorizian Club, the Cyprus-Hellene Club, the Hellenic Club where he served as a Director for fifteen years and the Nicholas Anthony Aroney Charitable Trust.

In 1960 he married Ann Pascalis and has three sons, Dimitrios (Jim) and Theodore Aroney, both doctors, and Stephen Aroney, a lawyer, who are married in turn to Evelyn, Felicia and Sophia.

Though now retired, Professor Aroney continues his scientific and general academic pursuits, holding an honorary appointment at the University of Sydney. He would like to take on fewer responsibilities these days but is still sought after for a wide range of community activities. A guiding principle throughout Professor Aroney's life has been to always endeavour to do his best. As a result of this, all Australians, not only Greek-Australians or Kytherians, continue to benefit from his life's work.

Professor Manuel James Aroney died in the early hours of the morning of Tuesday the 9th of February, 2011, aged 78.

The date of death was actually Tuesday 15 th February.