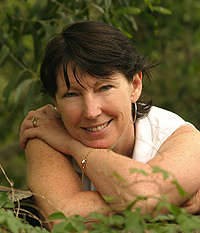 Children's author and UQ Ipswich graduate Toni Risson will soon publish a book based on studies of migrants in Ipswich called Aphrodite and the Mixed Grill.

She recently won a scholarship to start her PhD and a University Medal due to her high grades during her undergraduate studies.

"Study at UQ honed my writing skills and gave me new tools in research and analysis," Toni said.

While undertaking her PhD, which focuses on the cultural history of confectionery in Australia, Toni is busy tutoring at the Ipswich Campus and writing children's books.

And if all that work isn't enough to keep her busy, Toni has also recently concluded an oral history project about the Greek Café. She used cafes in Ipswich from 1900 to present day to understand what brought immigrants from villages in the Greek Islands to the region and the impact of their contribution on local communities.

The work has resulted in the publication of Aphrodite and the Mixed Grill, which is now available.

The book was supported by an exhibition in the Ipswich Art Gallery in September, 2007.

Toni Risson obtains her Ph.D. Dec, 2011. It is entitled: A Magic Bag: The Power of Confectionery in the Lives of Australian Children.

Lollies and Ekka go together

Let's be honest, when it comes to Brisbane's Ekka what do we remember? Lollies and sample bags!

So says Dr Toni Johnson-Woods, a University of Queensland academic and the president of PopCAANZ, the Popular Culture Association of Australia and New Zealand.

"For the past few years Toni has been working on Australia's unique confectionery heritage, in particular, 20th Century children's consumption of lollies," she said.

"They provide new information about children's sophistication as consumers, while some — like the Jaffa — define an era.

"Although the stories surrounding children's consumption reveal important differences between the children of the Great Depression and war years, the Baby-Boomers, and the children of generations X and Y, one thing is constant: lollies have contributed to the magic of Australian childhood.

The eldest of four children, Toni Risson graduated from the Queensland College of Art and then Kelvin Grove Teachers College, spending the next 10 years teaching Art and English to Queensland secondary school students.

As a foundation year student in a degree in Contemporary Studies at the Ipswich campus of The University of Queensland, Toni became interested in writing fiction.

Her books include Aphrodite and the Mixed Grill: Greek Cafes in Twentieth-Century Australia (2007) and two books for children, Licking Lizards (2005) and Batty Business (2008).

Food is one of the fastest growing areas of research interest, and Risson expects the number of food papers to double at the next PopCAANZ conference, which will be held in Melbourne in 2012.

PhD graduation is sugar on top

Dr Risson's PhD thesis, conducted within the School of English, Media Studies and Art History, was entitled A Magic Bag: The Power of Confectionery in the Lives of Australian Children.

Her project is the first of its kind to investigate lollies as a significant cultural artefact in Australian society.

Through investigating the manufacture, distribution and consumption of lollies, Dr Risson's work explores the cultural roles they have played in Australian childhood.

“By examining the topic of lollies, my thesis is also a history of Australian childhood and the shifts that occurred in children's lives throughout the twentieth century,” she said.

“I drew information from all kind of sources, and from all over the country, but the real-life stories were the highlight: when Australians reminisce about their childhoods, often eating lollies has a significant place in their childhood memories.”

Completing her research involved gathering the stories of nearly 300 people, many of whom shared their experiences of feeling enchanted by the opulence and colour of the lolly counter.

“Until now academic research hasn't recognised the importance lollies and their significance in children's lives. It's also a tragedy that so much information about our manufacturing history is already lost,” Dr Risson said.

The Confectionery Manufacturers Association and confectionery giant Nestle gave Dr Risson access to their archives during the project.
“My first task was to sort out the Australian brands and Australian products. I also found priceless artefacts that might otherwise never have seen the light of day,” she said.

Dr Risson's research focus turned to lollies while she was writing a history of Greek cafés in Ipswich for her honours thesis and many participants spoke of large confectionery counters.

“Courses offered during my undergraduate degree at UQ Ipswich gave me the opportunity to conduct self-directed research and I feel lucky to have had the freedom to explore my own research topics,” she said.

“My work does not examine health issues. We are responsible for the health of our children, but without understanding that lollies are part of the magic of childhood we have little hope of decreasing the amount of sugar children consume.

“We tend to imagine lollies as mere junk food. They cannot be so easily dismissed. One of the results of my research is that it unlocks the power of lollies in children's lives.”

Much of Dr Risson's research has already been published in cultural studies journals. Next year she will work on a completing a coffee table-style book that makes her work accessible to a wide readership.

The Bribie Island Seaside Museum is curating an exhibition based on Dr Risson's current research. The exhibition runs from December 17 to late February, 2012.