Jim was born on 1st May 1925 in Gunning, NSW near Goulbourn.

His parents were Christophoros Melasofaos Coroneos & Melopomeni Comino from Karava in Kythera, who came to Australia, where they started a café in Gunning, named The Busy Bee.

Jim was the oldest of 6 children, and was very close to his brothers and sisters and their spouses - Charles and Mary, Annie and George, Matty and Mick, George and Betsy, Peter and Lyn. He will be sorely missed by them and their families. 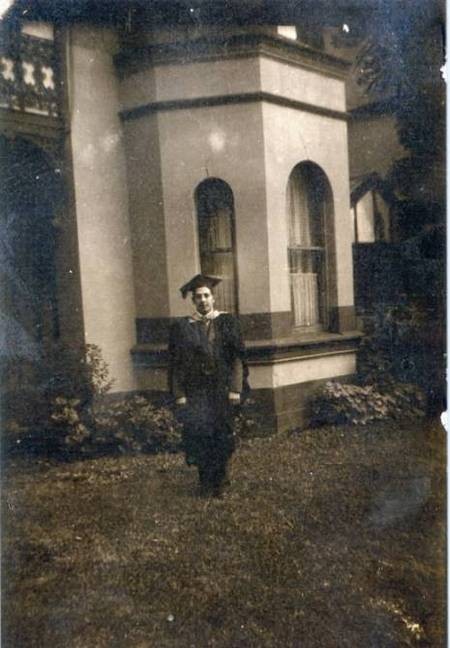 Jim began his schooling at Gunning Primary School where he showed a lot of promise and ability.

He then continued on at Goulbourn High School, where he lived with his Aunty Georgina and Uncle George. He would arrive home on the weekends, help out in the café, and play Rugby with friends, which he had a passion for throughout the years.

Due to his high intelligence, he was able to win a scholarship to Sydney University. There he achieved a Bachelor of Science and a Diploma in Education. 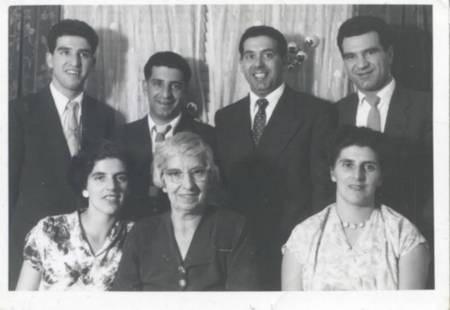 As you would be aware, Jim excelled in Mathematics, and commenced his teaching at country schools, including Goulbourn, Leeton and Yanko High Schools. He then taught in Sydney at North Sydney Boys, Cleveland St, Fort St, South Sydney and Vaucluse High Schools.

He found that many students had missed the fundamentals of mathematics, and he seemed to have a natural ability to teach them these basic concepts. He was a dedicated educator, and was passionate about helping his students reach their full potential.

He used to prepare detailed worksheets for his classes, which were well sought after by many teachers from different schools. This is when he decided to put these worksheets into a book. So, in 1964 he compiled them into his first publication, originally in his own handwriting (not typed).

He discovered that the market for these books were far beyond his expectations. So he had to learn the new skills of publishing and distribution to bookshops, schools, parents and students.

Because of his ability in Mathematics, he was invited to join University professors in setting the Higher School certificate examination papers. He also lectured at the Technical College and Sydney University.

In 1972, he chose to leave teaching and continue publishing and writing due to his wife Toula’s encouragement. He and Toula formed Coroneos Publishing, a leader in the field of Mathematics and educational books.
See:
http://www.coroneos.com.au/
Jim was a prolific author, writing over 120 titles himself & publishing more than 300.

Jim’s name is synonymous with Mathematics & teaching in NSW, something for which he felt a great honour. His family and friends are very proud of his achievements and all that he has accomplished throughout the years. His committment and service to providing students, and parents, with the best educational information and advice was exemplary. To Jim, “everyone was a pupil”. A well known catchcry in NSW schools was not to bring out your maths books, but to “bring out your Coroneos”. 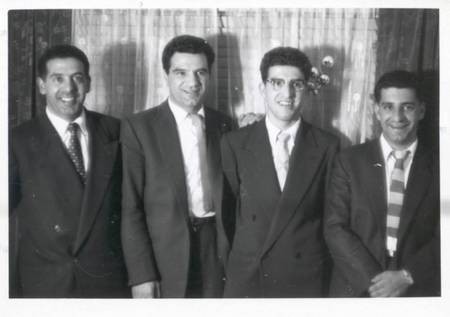 Jim met his wife, Toula at a Greek dance in Sydney, and they married in 1959. That union brought about 3 children. John, who is a medical doctor, Paul, who is a pharmacist and Suzanne, who is married to Michael. They have 3 beautiful girls who adored their grandfather, and who were adored by him. He often said he was lucky to see his grandchildren grow up in front of his eyes every day.

Jim always tried to guide his family in the right direction, and was very supportive and pleased with his children’s achievements.

He was the central figure for his family and friends, and the organizer of many get togethers and reunions.

He had a special place in his heart for his oldest friends and Koubari, Peter and Tina Andrew, and for the camping trips and family outings they used to share together. And he was also very grateful to know and have so many other close friends.

He belonged to various charitable organisations, including the Order of AHEPA, the Grand Lodge of AHEPA, and he was a President of Chapter Prometheus for some considerable time.

He was also a great supporter of the St George Greek Orthodox Chuch and St Spyridon’s College in Adelaide.

But we feel his greatest bond was with the Kytherian Brotherhood of Australia, of which he was a President and committee member for many years. He organised the Karavitiko Symposium over many decades; acting as both President and Patron. He he felt very strongly, and was very passionate about, his Kytherian heritage.

He was very much a people’s person, always active and full of energy. He always had the time to do whatever was required and asked of him. His generous heart was experienced by many people throughout his life.

He has and always will be highly respected and loved by many, and today we are paying our respects to a unique man, who had so much to offer us all. 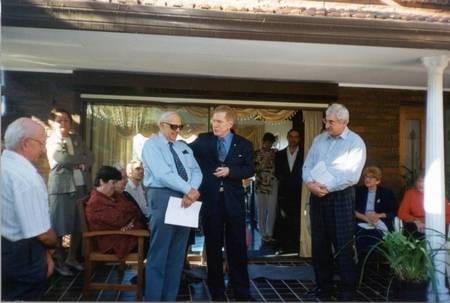 James Coroneos (right) being honoured by Justice Kirby, Judge of the High Court of Australia, (centre). On his right is good friend, and fellow committee member of the Kytherian Association of Australia, (Em)Manuel Cassimatis..

He will forever remain in our hearts and minds. All of us who knew and were influenced by Jim have been blessed and privileged. He will be sadly missed, not only by his family and friends, but by everyone who had the pleasure to know him.

Photographs of Jim, Jim's parents, brothers and sisters, the family tree, family documents, and the Busy Bee are all available at other locations on the web-site. [Search internally under Coroneos, or Melasofaos.] 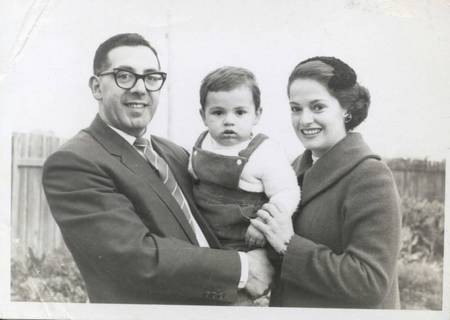 James and his brothers. Young adulthood.