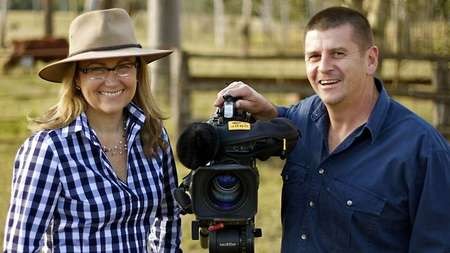 Pip Courtney was the producer of the Landline programme on the Roxy 75th Birthday celebrations.

She was instrumental in giving this "Kytherian" event a national profile.

Those who attended the event would have seen her in action with two film crew members "in tow".

Photograph of Pip at the Roxy event

The tragedy is that one of the three Australian Broadcasting Corporation (ABC) crew killed in last weeks helicopter crash was her husband John Bean.

MY dad was a journo and a tough old bugger and pretty critical. The best thing he could say about anyone was they were a top human being.

When he met John (Bean), he said to me: "that boy is an amazing human being".

My dad was right.

I just hope lots of people have a Beanie in their lives like I've had. It was such a privilege to be his wife. I don't know how I can be without him.

We met on a shoot. I moved to Canberra from Tasmania in 1993 and John was cameraman on my first shoot. I came back from that shoot and said to one of my friends: "I think I've just met the nicest man in the whole world."

She said "everybody loves John Bean".

We became mates. Our friendship turned into something so wonderful I can't believe I was so lucky. He loved me so much it amazed me. He was the kindest, most thoughtful person. He was the sort of guy if I spotted something in a shop in January and said that's nice it was under the tree in December.

His compassion and empathy were incredible. Everyone who met him would remark that John was very professionally generous. He was the first to ring another cameraman and say how wonderful their work was. He mentored young film students at Griffith (University). He was a busy guy but he gave so much time to others.

He was so talented. Just to watch him work was amazing, the way he put people at ease. He had a beautiful eye.

Nothing he did was ordinary. He never stopped trying to give his reporters the best pictures. It didn't matter if it was a news story, an election campaign, Landline, the Arts Show. He put 100 per cent into everything.

I just loved working with John. In the last couple of months we got the most work together we've had in a long while. We had 12 days on the road together.

It was wonderful. I've still got a couple of stories of his I have to cut. I don't know what it's going to be like going through the vision and hearing his voice. I have to make sure those last few stories are bloody good to honour him.

I've been overwhelmed by messages. The house was full of people yesterday, broken-hearted like I am, that he's gone. I'm just so pleased that people get what a special person he was and I want to make sure he is remembered.


Details of the Helicopter crash

Investigators could take years to determine ABC chopper crash cause

AIR crash investigators could take up to a year to identify what caused a helicopter crash that killed three ABC news veterans.
Reporter Paul Lockyer, pilot Gary Ticehurst and cameraman John Bean perished in the chopper which reportedly erupted in a fireball about 7.30pm CST on Thursday on their return from filming a third documentary of Lake Eyre filling with water.

Four investigators from the Australian Transport Safety Bureau travelled from Marree to the remote crash site on Saturday, about 150 kilometres northwest of the town.

The Bureau's Stuart Godley said two helicopter engineers, technical specialists and an aeronautical engineer would be joined by police at the crash site.

He said an investigation on such a scale usually took 12 months to complete.

"For a big investigation like this we will aim to get it done within a year," he said.

"It's pretty usual for our investigations into fatal accidents like this to take that long. There's a lot of people involved and a large, complex aircraft."

The investigators will inspect the wreckage and speak to witnesses who are believed to have seen the crash.

"There was a tourist group there on Thursday and apparently a number of them witnessed the incident, so investigators will be talking to as many of them as they can get hold of," Mr Godley said.

Meanwhile, 100 people on Saturday attended a memorial held for the newsmen in the nearby town of William Creek.

A priest from Coober Pedy led the service at the William Creek air strip where a minute's silence was observed as a mark of respect for the men.

William Creek pilot Trevor Wright spoke at the service and said the large turnout illustrated how well respected the men were in the local community.

"I'd just like to say on behalf of the Williams Creek and outback community we feel sympathy for Gary, Paul and John, we'd like to extend our sympathies to their families and the ABC community," he said.

Before the tragedy, the three men were scheduled to film footage and interviews around William Creek over the weekend for the third part of a documentary on Lake Eyre.

In a career spanning more than 40 years, Lockyer has worked as a correspondent in Washington, Singapore and throughout Asia. He won a Logie Award for best TV reporter.

Bean, married to Brisbane Landline reporter Pip Courtney, had worked for the 7.30 Report, Catalyst, the New Inventors and Gardening Australia in a 20-year career with the broadcaster.

Ticehurst had close to 40 years of helicopter operational experience, including 30 years as chief pilot of Film Helicopters.

THE deadly seas which tore the Sydney to Hobart fleet apart in 1998 had done their best to snatch Gary Ticehurst, not counting on his bravery or bullish determination to save the lives of others.

The veteran ABC pilot, who died on Thursday night in a helicopter crash with journalist Paul Lockyer and cameraman John Bean near Lake Eyre in South Australia, was yesterday remembered as a "guardian angel" of the skies.

Hovering above the fleet in 1998 during the worst storm in race history, with 100-foot waves breaking over the bottom of his helicopter, he refused to leave his watch.

Tragically, six sailors died - but Mr Ticehurst is credited with helping save dozens of others by answering mayday calls and passing crucial information on to search and rescue officials.

"He was like our guardian angel in every race. He had our back if we needed him," Skandia skipper Grant Wharington said.

It was the same fearless professionalism which helped Mr Ticehurst find round-the-world sailor Jessica Watson on her run home to Sydney.

The Daily Telegraph's Brett Costello, whose image won him a Walkley Award last year, shared that glory with Mr Ticehurst.

"The weather was awful, the seas were huge and the wind was really wild. It was like looking for a needle in a haystack - but Gary found her," Costello said.

It makes the circumstances of Thursday's crash on the edge of the remote Tirari desert even more puzzling, with witnesses claiming conditions were near perfect when Mr Ticehurst took off with Lockyer and Bean.

Tourism operator Rex Ellis had farewelled the respected trio around 7.30pm, watching as the copter was lost from sight over nearby sand dunes, only the "glow of a very large fireball in the distance" signalling the tragedy.

Air investigators claim the cause of the accident may not be known for a year, with only the copter's tail rotor remaining after the blaze. The wreckage, stretching over 50m, appeared like a blackened scar.

The impact of losing three much-loved colleagues and friends was felt right across the media industry.

Lockyer was tipped to earn a gold Walkley for his work on the Queensland floods.

The former foreign correspondent was hailed a hero of "real Australia".

His wife Maria said: "For 38 years Paul has been my soulmate ... he will be in our thoughts every day."

"I fell in love with him on the road and adored working with him ... I can't believe he's gone," she said.