BARSTOW -- Although Peter Clentzos only lived in Barstow for a brief period of his life, his story will live on for years to come.

During his time in Barstow as a teacher and coach from 1936 to 1942, Clentzos led the Riffian football team to two California Interscholastic Federation Finals. His 1940 team racked up a 217-point season to their opponents' combined 47 points.

He coached other sports as well, including basketball, baseball, wrestling, and, of course, track -- his Olympic sport. He also started the cross country team, which has since become a Barstow athletic tradition.

His trademark phrase, "hubba hubba," got the runners moving down their Main Street course.

Following the attack on Pearl Harbor, Clentzos left Barstow and joined the Army. He taught physical education to soldiers and hurried them along with the same phrase, "Hubba hubba!" 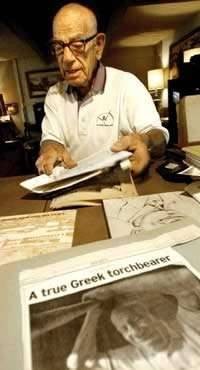 File Photo by Lisa Hart. Olympian Pete Clentzos looks through his collection of articles and newspaper clippings about his accomplishments in this 2004 file photo. Clentzos died last week due to complications arising during hip surgery. He was 97 years old.

As the story goes, the soldiers caught onto his p h r a s e, a n d i t spread worldwide, Clentzos said in a 2004 interview with a Desert Dispatch columnist.

Born in Oakland in 1909 to Greek parents, Clentzos heritage served him well following his g raduation from the University of Southern California.

During Olympic tryouts for the 1932 Los Angeles Games, Clentzos missed a spot on the U.S. Team by one place in the pole vault event.

However, because of his Greek heritage, he was able to compete for Greece. Although he placed seventh in the games, Clentzos talked often about living in the Olympic Village during training and the Olympic experience.

In 1935, Clentzos broke the Greek record in pole vaulting after jumping 13 feet 5 inches. The record stood till 1950.

But his Olympic involvement wasn't over. In the 2004 Olympics, Clentzos, then 95, carried the torch through a 400-meter stretch of Los Angeles as it made its way around the world to Athens.

"Everybody celebrated and honored him with friendship and support over the years," his son, Pete Clentzos Jr., said.

Clentzos died of a heart attack during a hip-revision surgery last week. Although he understood the risks of undergoing major four-hour surgery, living a life confined to a wheelchair was unacceptable to the 97-year-old former Olympian.

Up until recently, Clentzos had been extremely active. But he injured his hip earlier this year when he was using a leg press machine following an earlier hip surgery. He was using crutches and a wheelchair to get around.

"He was in pretty good shape up until these last few days," his son said.

Services will be private with interment at the Forest Lawn Memorial Park in Glendale.

"He just didn't want anyone to feel sorry for him -- just remember the good stuff," Peter Clentzos Jr. said.