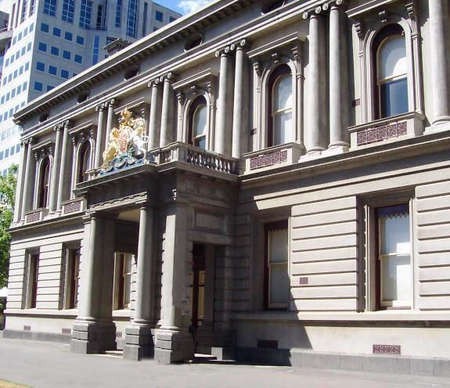 Most Kytherian, Hellenes, & Philohellenes, are unaware that a Greek-Australian Museum exists in Australia.

There IS a Greek Australian Museum in Melbourne.

It is housed in the former Royal Mint Building. This building is one of the most palatial heritage buildings in the Central Business District (CBD) of Melbourne.

"The Hellenic Museum aims to be the nation's foremost centre of Hellenic history, culture and the arts. It is a place where the public can explore the legacy of the Greek immigrant experience in Australia and examine the influence of Hellenic culture and people, from antiquity to the present".

to gauge how active it is. (Very active!)

ONE of Melbourne's prominent Greek families has funded a new museum in the CBD.

The Hellenic Museum was the dream of multimillionaire businessman Spiros Stamoulis, but he died in May last year.

His family, including his property-developer son Harry Stamoulis, have carried on the project, quietly opening it in recent weeks in the heritage-listed Royal Mint building in William Street.

It consists of photographs by journalist Garrie Hutchinson and Peter Ewer of monuments in Greece to World War II Australian soldiers who fought there.

The Hellenic Museum is dedicated to the memory of Spiros Stamoulis' daughter, Nafsika, who died, aged 24, in Athens four years ago. A large portrait of Ms Stamoulis hangs in the museum's foyer.

Mr Stamoulis died of cancer aged 69, but a Greek community source said intense grief over his daughter's death hastened his demise. "He died of a broken heart," said the source.

His family, including wife Helen and two surviving children, and six grandchildren continue to manage an extensive property portfolio across Melbourne, the Gold Coast and in Greece.

The Stamoulis family's wealth was this year listed by BRW magazine at $411 million.

Born in 1937, Spiros Stamoulis emigrated from Greece as a 12-year-old. He later built the Preston-based Gold Medal soft-drink empire, and owned the 3XY Greek radio station and the Greek-Australian newspaper Ta Nea.

Downstairs houses, on permanent loan from La Trobe University, the A.D. Trendall private collection of antiquities — more than 100 pieces of ancient Greek pottery dating back to 850BC.

Another room will be dedicated to the Byzantine era, and three rooms will cover Australian Greek migration and settlement stories, photos, documents and objects.

Sotiris Hatzimanolis, editor of local Greek newspaper Neos Kosmos, said the new museum "has huge significance both for the Greek community and the wider community". It has "huge potential" to promote both Greek and Greek-Australian culture to tourists and locals.

In 1998, the Kennett government opened a Hellenic antiquities component of the Immigration Museum, but it failed, partly due to lack of Greek government support.

"I hope the whole Greek community will get behind this and support it … we think that it is a worthwhile project," Mr Hatzimanolis said.

Entry will be free, but fees may be charged for future temporary exhibitions on the first floor.

The museum is negotiating to import from Greece in February The Birth of Democracy, a display co-sponsored by the Hellenic Foundation for Culture in Greece and including relics such as stone tablets used in ancient Greece as election ballot papers.

The Hellenic Museum secures the future of the 1871 Mint building, a former coin-making centre, wedding registry and lately headquarters of electronics company TEAC.

The State Government now owns the building and has long-leased it to the Stamoulis family.

The Spirit of Anzac exhibition will be open from next Tuesday to Sunday from 10am to 3pm at 280 William Street. The museum will normally be open on Tuesdays, Wednesdays and Thursdays, 10am to 3pm.