Jim Saltis, author of the book My Four Homes 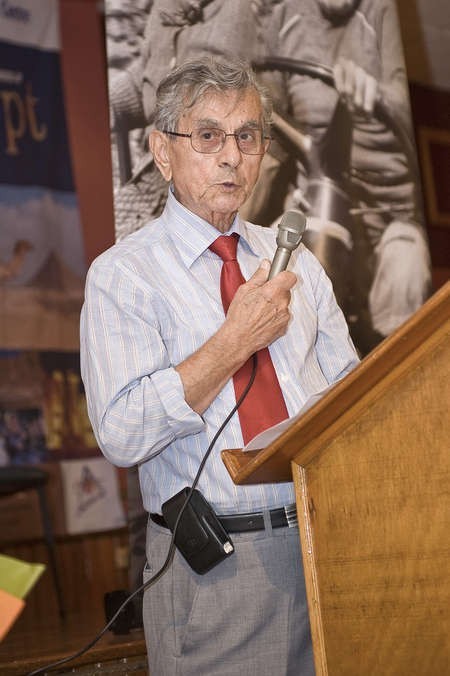 delivering his speech at the official Book Launch, held on Wednesday, 8th December, 2010, at The Greeks from Egypt Club, 140-142, McEvoy Street, Alexandria, Sydney.

I was told that there is an expectation from me to deliver a speech which should not be too short or too long. Definitely not a tutorial and if possible entertaining. I will try to abide by these parameters.
I take the liberty of reading from a prepared script rather than risk the indignity of revealing evidence for my mental demise.

I thank you all for turning up tonight despite the lectures, the school concerts and the preparations for the Festive season; I also wish to thank the Kytherian World Heritage Fund for their decision to publish my book. I thank them for this and I admit the book, had it been a cinematographic expression, would have attracted an R, Restricted classification. Yet it contains no rude words, or gratuitous pornography.

I must also mention that I am grateful for the help, advice and encouragement I received from Professor Emanuel Aroney, the indefatigable duo of George Poulos and Angelo Notaras who made the courageous decision to publish this book. George Poulos who carried out a very pedantic edit and the artistic designer, and typesetter, well known for her literary contribution to the Hellenism in Australia, Anna Arsenis.

I also acknowledge the presence of Mr Lorenzo Montessini who is the representative in Australia of the world’s famous and most modern bibliotheque, the Alexandrine Library. Mr Montessini accepted our invitation to attend the launching and to transmit a copy of the book for inclusion in the exhibits of this unique library, which incidentally prides itself on its association with the Hellenistic period that followed the conquests of the Macedonian Greek, Alexander the great. I emphasize that he was not an Athenian Greek or a Spartan Greek or a Theban Greek. He was Greek who spoke Greek and believed in he Olympian dodekatheon, known as Iskandar to the Egyptians, and to countries as far afield as Afghanistan.

The book is about us, the millions of Geeks who travelled to the four corners of the world to seek liberation from the curse of poverty, political persecution, and religious confrontations, failed ambitions, or to seek a romantic escapade and new adventures. The majority of us succeeded spectacularly in our adopted countries. We were predominately economic refugees seeking a better geographic address than the one we acquired through the accident of birth.

The common wisdom is that our success is a consequence of hard work which is true. Also contributing to the success, were the opportunities in the new country. Undoubtedly our grandfathers who for some reason never migrated and lived on the island (of Kythera), worked much harder than us for a plate a fava, a couple of slices of dry bread and few ounces of olive oil... The national economic pie in this lucky country was much bigger then and was partitioned into large portions to the five something million who lived on this island continent, the only country that expands and must expand over a whole continent.

I will not talk about my book, leaving the critique to you, the readers. What I tried to do was make a sincere attempt to describe the morality of the era and its influence on our lives, the risks we experienced because of the non existence of organised labour Unions and the absence of Social Security.

My Four Homes is not my first foray into writing. My first book, which is ready for publication is entitled Efxes katares kai exorkismi (Blessings, curses and exorcisms.) It is a novel, and like My Four Homes its backdrop is Alexandria, although the tale could have happened in any country.

I often hear older people complaining that we were born too early, meaning of course that the new generations have a better life than we did. But I have no complaints about the time in which I was born. I belong to a generation that witnessed the splitting of the atom, the landing on the moon, the eradication of polio, typhoid, tuberculosis, advances in lung and cardiac surgery, the acceptance of leucotomy, and above all, the extended quality and longevity life. The social revolution that was triggered by the Pill, Viaga and vasectomy, and the abolition of the concept that a woman is a lesser human being destined to be an unpaid servant to man and family.

I hope you will enjoy reading “My Four Homes” as much as I did writing it.