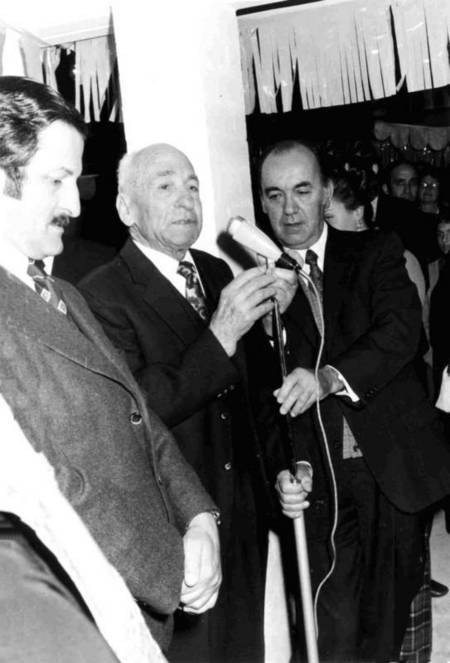 After his return from a family visit to South Africa in 1971, Laurantus began casting around for another project on which to spend his money. Setting up the Chair of Modern Greek had given him so much pleasure and satisfaction that he wanted to find another equally worthy cause, so he asked Jack Stamell one day whether he knew of any suitable charity that was Greek-sponsored without being a purely church organization. As a solicitor, Stamell was aware of the range of charities in Sydney, and besides, Laurantus had a high regard for his solicitor’s integrity and judgement.

After making a few inquiries, Stamell suggested that St Basil’s Homes for the Aged might be what he was seeking. This was a non-denominational charity run by an efficient board of Greek businessmen who had taken over the management of the homes from the founder, Sister Mary Dorothea, a controversial Roman Catholic nun. Nicholas was interested enough to arrange an appointment with the administrator, Father John Kapetas, not knowing that this meeting was to be a turning-point in his life.

The gentle, bearded young priest who called for him at the Masonic Club and showed him around St Basil’s, quietly explaining the aims of the charity and pointing out the site the board had selected for a new hostel should they raise enough money, made a strong impression on the older man. Nicholas asked only a few questions over the lunch that followed and was driven back to his club without revealing anything of his intentions.

By this time the Whitlam Labor government was in power, and was subsidizing retirement homes by giving one dollar for ever y three raised by the builders. Nicholas liked this idea that for every three dollars he might donate, the Federal government would add another.

Father John had no sooner returned to his office in Ashfield than he received a phone call from his recent visitor. ‘Father John,’ Nicholas said, ‘go ahead and buy that land. I’ll put the money up.’ This generous offer was so unexpected that it left the priest speechless. When he replaced the receiver, he could not remember what he had said, nor even if he had properly thanked Laurantus. He could never have dreamed, still less expected, that anyone should so easily offer one quarter of a million dollars. But that was only the beginning, for in the next seven years Laurantus would make regular donations to the charity, bringing the total before he died to $425,000.

The Board of St Basil’s Homes went ahead with the purchase of a site for the new building — the earlier site that Laurantus was shown having been rejected as unsuitable — and the erection of eighty-four motel-type units, which the Board later decided to name Lourantos Village after the charity’s most significant benefactor, proceeded rapidly.

It was typical of Nicholas Laurantus that, at this stage of his life, when the preservation of the Greek language and Greek culture in Australia was so important to him personally, he accepted the Greek form of his surname in the title of the Village. Although he would not have asked for this recognition, he was gratified by the Board’s decision. Writing to them in 1976, he said:

I can only praise your Committee and all those associated in the carrying out of this magnificent project, for it has been obvious that efficiency prevailed throughout and efficiency in all undertakings is not a small matter.
I am also grateful to St Basil’s organization for naming the edifice ‘Lourantos Village’ - a fine gesture by your Committee, which not only more than satisfies my own limited vanity, but also it appears to have delighted the feelings and pride of the multitude of the Greek community. That in itself is full compensation.

In April 1976 the Village was ready for occupation. Situated in a quiet street in Lakemba, a ten-minute walk from the railway station, the Village is a narrow two-storeyed brick building, horseshoe-shaped, with a sweeping, semi-circular drive passing the porticoed front entrance. A large entrance vestibule with comfortable armchairs leads to the administration area and a communal dining room, while upstairs the single and double rooms are fully carpeted and well appointed, their wide windows offering a distant glimpse of the city to the east. Several lounge rooms, a television room and a sunny terrace outside the main lounge complete the comfortable, even luxurious accommodation.

On the opening day, Father John Kapetas put a carnation and a card of welcome in each of the newcomers’ rooms. It was a friendly and gracious beginning for what was to become a very happy life for many old people, mostly British-Australians, who wanted to remain in the suburb where they had lived as independent residents, often for many years.

The official opening of the new retirement home took place one month later, a golden May afternoon, with a number of official guests, including Archbishop Stylianos, Nicholas Laurantus and Gough Whitlam. Gough Whitlam, now Leader of the Opposition, performed the opening ceremony, having promised to do so nine months earlier when, as Prime Minister, he had laid the foundation stone. Archbishop Stylianos then blessed the new building, Whitlam unlocked the front door and the official tour of inspection began.

As soon as he could safely slip away from the official party, Nicholas went to talk to the new residents, some of whom he had already met. One of them, Clarrie Carpenter, an Englishman who had served in the Australian navy, became a friend. On later visits, Nicholas would leave any group of officials and disappear into Carpenter’s room for a quiet chat about life in the navy. They also corresponded. Nicholas kept for a long time a letter from Carpenter saying, ‘on two occasions you asked me whether I wanted anything. Well, here is my sincere wish — Be my friend always.

The superintendent of the new Village, Hilda Heatherington, met Laurantus for the first time at the official opening ceremony and took an immediate liking to him. ‘He looked so frail and yet he spoke so forcefully and to the point,’ she said afterwards. He impressed her as a decisive man who knew what he wanted; a simple, straightforward man whom she felt she could trust. He told her that he had come from Greece, penniless, and that he had had to prove himself. Now that he had done so, he said, he wanted to do some good with his money; he wanted to see people benefit from it while he was still alive.

A newspaper reporter who was at the opening ceremony asked Laurantus about his plans for the future. ‘All I want to do now,’ he said, ‘is to give back the money I have made to other people to enjoy, especially children. Eventually I intend to leave all my money to charity. I have no sons.’ He broke off, then added with a smile, ‘If I did, I might not be so generous He said that he had given away $600,000 in his lifetime. ‘But don’t build me up or boast about that. I can spare the money,’ he added quickly.23 ‘What point is there in accumulating wealth? It’s not healthy.’

Not long after the opening of the Village — according to one account, later denied — Laurantus went to lunch with Gough Whitlam who had extended the invitation while they were talking together that afternoon. It was a lively meal. Afterwards Whitlam said to his guest, ‘I trust that you enjoyed our lunch, Mr Laurantus’.
‘Yes,’ he said, ‘I enjoyed the lunch very much. I enjoyed your company too — but I still won’t vote for you.’
Whitlam laughed heartily, knowing well that the wildest of horses could not make Laurantus a Labor voter.