submitted by Kytherian Association Of Australia on 13.09.2007

Parading the icon of Ayios Theothoros 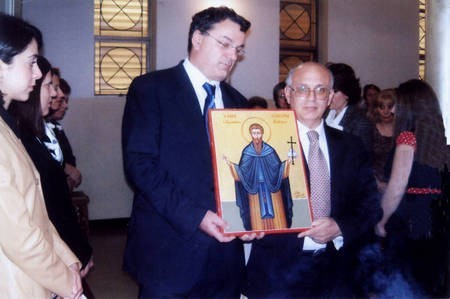 ...patron saint of the island of Kythera.

Parading icons of Kytherian significance is an important part of the Kytherian heritage and tradition. These "cermonies" must be maintained.

Written into the Constitution of the Kytherian Association of Australia, is a compulsion to celebrate the feast days of Myrtidotissa, Ayios Theothoros, and Ayia Elesa.

The Karavitiko Symposium also celebrates the feast day of the patron saint of Karavas, Ayios Haralambos, in the same way.

The monastery of Saint Theodoros was built by craftsmen from Monemvasia at the place where a smaller one previously existed and where Saint Theodoros had lived like a hermit the 10th century. The Saint was born in Koroni and came to Kythera when the island was deserted. For this reason he is perceived by the Kytherians to be the one who brought life to the island. Saint Theodoros died on the 12th of May 961 A.C. and his body was found intact three years later.

The initial re-settlement of the island was undertaken by one man. According to his biography, Osios Theodoros is said to have arrived on the abandoned Island sometime during the middle of the 10th century (Herrin 1972: 45; Leontsinis 1987:43). Theodoros chose the remains of the earlier church of Sergius and Vacchos, situated somewhere near Logothianika, in which to settle (Herrin 1972:45). The saint lived in very difficult circumstances and his original companion almost immediately left Kythera, but Osios Theodoros lived for some time on the island, apparently in isolation. The saint’s example for holiness and his courage in defying the wild circumstances on the island, however, attracted some attention and after his death Kythera began to attract other settlers from the Greek mainland.

The monastery of Ayios Theothoros lies near the villages Logothetianika and Aroniadika. It was built on the original site of the temples of Agios Sergios and Agios Vacchos. There, Saint Theodoros, who is the protector of the island, cloistered in the 10th century A.D.

Saint Theodoros was from Koroni (Mani) and came in the island from the Monemvasia to cloister. He stayed in the abandoned temple of Saint Sergios and Saint Vacchos for one year, eating only carob-beansfor food . He died probably in 922 A.C. His relic was found, not so alterated, by Monemvasians who inhumed it in the interior of the temple. Later the monastery was founded there. During the British occupation, a school was built next to the temple.

It's well worth visiting the monastery. It is a green-clad and a very quiet area.