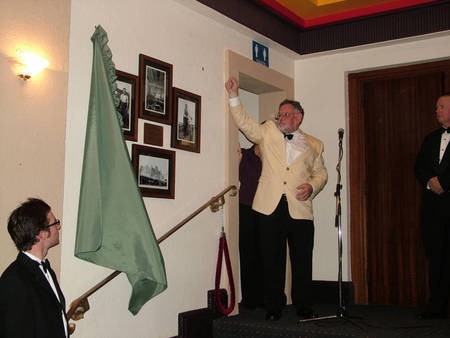 The unveiling coincided with the launch of the book, Katsehamos and the Great Idea.

Bottom: The Roxy Theatre with unfinished facade, and Peters and Co.'s cafe and shops. Bingara, April 1936.

THE FOUNDERS OF BINGARA’S ROXY THEATRE

Bingara’s Roxy Theatre was founded by
Peter Feros, George Psaltis and Emanuel Aroney.
The three men came to Australia from the Greek Island of Kythera in the early 1920s and formed the cafe partnership of Peters & Co, Bingara.
The Roxy Theatre opened on Saturday March 28, 1936 to a packed house.
Mr George Psaltis addressed the crowd on behalf of Peters & Co. and
“expressed his appreciation of the support of the people of Bingara and district, whose friendship and encouragement had given them the inspiration to carry on in the face of all the obstacles that had beset them. They were but the servants of the people and they were out to give them the utmost value for money, both in entertainment and service.”


Mr GEORGE COSMAS PROTOPSALTIS, now in his nineties, gave a speech at the unveiling, about the qualities of the founders, and their hard work ethic. George came to Australia at the age of 14 in 1928.

He worked in cafes in Armidale, and other country towns. He was a partner at the Golden Bell Cafe in Barraba in the late 1930s, a business which was previously owned by Peters & Co., the firm which built the Roxy. George was the only person present who knew personally. the three partners of Peters & Co.

299:My fathers' name was Theodore Minas Comino Palavras, and my mother was Hazel Irene Comino, (nee)Donnelly, from Ireland. They were married at Bellingen NSW. Re: the Roxy Theatre in Bingara. I was born in Bingara in 1940, when Dad left Wee Waa - Comino Bros, he went to Bellingen and run the picture theatre there for 4 years and was credited with showing the first Cinesound films in NSW there according to a historian, [probably Kevin Cork], who recently made contact with my brother, Michael, in Merriwa. He went to Moree into a cafe from there, and due to the depression left Moree, eventually settling in Bingara. He worked at the Roxy, on and off. He was part of the history of that Theatre.