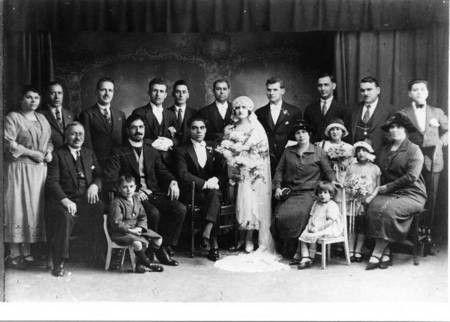 The circumstances of his life were tragic.

He established himself in Goulburn, where he owned a Refreshment Room in the main street.

Dimitri died as the result of injuries sustained in a car accident in 1936. He was travelling by car to go and see business he was wanting to purchase, in a neighbouring town, (West Wylong?). My father recalls that a fellow Greek in the car with him was severely injured - but recovered. This person later established a shop in Dubbo, NSW. Mrs Anastasia (Tassia) Varvaressos (nee, Zervis), later to "adopt" second eldest son Haralambos (Harry)- recalls that 2-3 persons were killed in this accident. Goulburn newspaper reports would establish the exact toll of the car accident.

Letter of Athena (Tzortzo)Poulos to mother-in-law Olympia, explaining the circumstances of Dimitri's death

James is buried in Goulburn Cemetery.

Leaving 4 young children under 6 years of age - George, Harry, Con and Olympia (Ollie) - without a parent.

Panayoti was recently arrived and only 22 years of age. And James's other 6 brothers and sisters were in Karavas, Kythera, or Pireaus.

An oral history told by Con Dimitri Tzortzo(Poulos), about brothers and sister, George, Harry, and Ollie