Wedding of Peter Crithary to Irene Cretan, and Nick Psaltis to Louisa Crithary 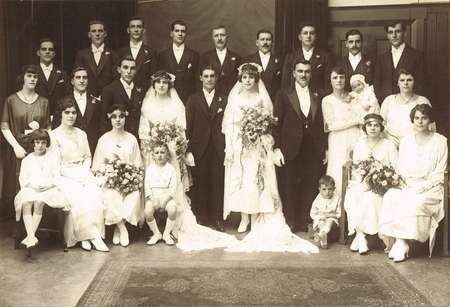 In fact for the Crithary family - it was a "triple marriage" - as a another sister of Peter and Louisa married Sarandon Zantiotis, in Kythera, on the same day.

Back Row: Left to right

"The Founding Fathers of the KAA were

On Jan 30th 2012 – we had a photograph of - and a the life story of only one of the Founding Fathers of the KAA. The first President Kosmas Cassimatis. This was through research undertaken by Peter Vanges, and by Ann Coward in 2002, on the occasion of KAA’s 80th Anniversary.. (See article attached).

Through work I had been doing with Vasi Margetis – we extended our knowledge and photographic record to 3 –by mid-February – we could include her father Bretos Margetis and Kosmas Andronikos (spelt Charles Andronicus in English). They are the three portraits that now hang on the centre of the southern wall of Kythera House in Rockdale.

This constituted a very poor maintenance of the historical record on KAA’s part – so I have made it a mission to track down photo’s and life stories of the remaining 5 Founding Fathers of the KAA.

Vasi Margetis came to the fore again, when Nick Marcello’s photograph came up in an issue of a newspaper called the Kytherian voice, in 1927, that she will donate to us this week. So that left only four to go, although Nick’s photographs are poor quality “newsprint with moire effect” types. I suspect that Nick Marcels that some of you know is a relative – so if anyone has contact details for Nick Marcels, could they please advise me?

I knew that my best hope of gaining photo’s of the remaining 4 would be by obtaining a copy of the photo of Louisa Psaltis’s (nee, Crithary) wedding, because her husband’s brother John was another KAA founding father, as was her elder brother Theo Crithary, and there was some hope that both Bill Feros and Peter Minoukos would also be in the wedding party photo. The Psaltis wedding was also held in January 1923, which would make the photo’s of the founders (roughly) “date authentic” – the KAA being born in 1922.

Then I was made aware by you, Paul of the extensive photographic archive of your grandfather Emmanuel Mavromatis (Matis, Mathers) - who was one of the real pillars of the KAA – having served 14 years on KAA Committee – many of them as Treasurer in very trying times (through the Great Depression). Emmanuel kept a large archive of 1900-1940 photo’s that you kindly agreed to allow me to scan. Those scans are now on the KAA Kythera House computer / server.

As I was "scanning away" - I came across a photo in Emmanual Mavromatis’ archive of Louisa Psaltis’s wedding. As we found out above - she was married in a double wedding with her older brother Peter Crilthary, and in a Crithary family triple wedding, on the same day.

Emmanuel’s brother has named some of the persons in the photo – and yes....he has identified where Theo Crithary, John Psaltis, and Bill Feros are standing. (We have a photo taken in 1972 – with Bill Feros in his 80’s taken at the time of the 50th Anniversary of the KAA – but no photo of him in his 20’s. Bill was the only Founding Father still alive in 1972 - so obviously being a member of the KAA is deleterious to your health?) Does anyone know who the descendants of Bill Feros are?

I have put these together in a (provisional) montage – with only Peter Minoukas missing. I won't release that montage until I definitively verify the Psaltis and Feros images, and gain an image of Minoukas.

Peter Minoukas is not identified in the Psaltis-Crithary wedding photo – but I suspect he may be in the photo. I also strongly suspect he is in the photo taken outside Ayia Triatha of the Church Committee in the 1920’s – which is now in the KAA Library Archive, and which features in the KAA Founding Fathers webpage.

A John Minucos is a member of the Collector’s group that meets at Kythera House at the moment – and I would be very surprised if he is not a descendant of the KAA’s first Vice-President? Again, does anyone have his contact details?"