Photos > Cafes, Shops & Cinemas > A night at the ROXY

A night at the ROXY 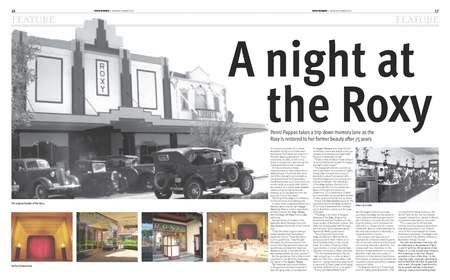 Note that the original photographs of the Roxy, which are displayed in this feature, are from the book Katsehamos and the Great Idea © Peter Prineas. They are reproduced here, with many thanks.

It’s almost impossible for a Greek Australian family not to have been touched by the Greek cafe culture or the shop keeping generation. From snack bars, to cafes, to fish’n’chip shops to burger bars, last century the Greek Australian’s had it covered.

It’s the contribution Greek migrants made to cafe culture that is extraordinary. The stories that came out of this time will ring true with so many second and third generation Greek Australians as at some point our auntie made us a spider after school, we snacked on a potato cake between meals and we fondly remember stocking up on sandwiches from the shop for a trip to the beach.

The story of the Roxy is no different, but the full story is something else. In 1936, three Greek Australians from Kythera, were inspired by a megali ithea (big idea) to build a magnificent art deco cinema, the Roxy Theatre with the Roxy cafe Peters & Co Cafe adjoining. The three partners were Peter Feros, Emanuel Aroney and George Psaltis.

George Poulos, a Trustee on the Kytherian World Heritage Fund, told Neos Kosmos the history of this cultural hub. “They [the three original owners] really overextended themselves,” explained Poulos. “They decided to build a guesthouse. They thought that when the farmers came to the cinema that they would all stay in the guesthouse and have this luxurious weekend, eating in the cafe etc etc. It was overcapitalised by 2000 percent.”

And the Kytherian gentlemen had a determined opponent, a one Mr Victor Peacocke, the owner of the Regent Theatre. “Mr Peacocke had a small theatre in Bingara and decided he wouldn’t his Regent Theatre, then they had this incredible cinema war where prices got cheaper and cheaper and eventually the poor Greeks went broke. “It was a little bit like a Greek Gallipoli story but they’ve left us with this legacy that we’ll never forget.”

The legacy left behind is something that is significant on a number of levels. Greek cafes changed the course of Australia’s cultural history and left a significant legacy on our culinary and cultural landscape. The restoration of the Roxy captures the spirit of a community that has triumphed over years of drought and economic downturns. It is a celebration of what can be achieved by people who believe in their rural community and its future.

Poulos told Neos Kosmos about all the significant factors the Roxy represents to not only Greek Australian heritage but to Australian culture and the town of Bingara. “The Roxy is the heart of Bingara. Because of the Roxy, Bingara has reinvented itself and hooked into the broad stream of Australian culture. The town has reinvigorated itself through the first major grant received by the New South Wales government.

“Secondly, at the back of the Roxy cafe will be a TAFE centre for young people to learn how to be in the hospitality trade, in the cinema trade. So instead of having limited opportunities in a small country town they are introduced to these industries. “For the Greek Australians like me, I was brought up in a cafe, so when I walk into that shop - even when I talk about it - I get goosebumps because it’s a memorial of how I grew up and what my father suffered for 30 or 40 years.”

Poulos told Neos Kosmos that it was then Bingara Shire Council (later, Gwydir Shire Council) who purchased the Roxy, but also wrote to local, state and federal government to gain funding to not only refurbish the original cinema, but to purchase the cafe and turn it back into the original Greek cafe. Also, to create what will be the only cafe museums in Australia, a Greek Australian museum.

The museum has been set up to highlight the influence Greek migrants had on the cafe culture and the cultural and culinary diversity in Australia. The museum will be a dedication to the history of Greek settlement in country Austraila. It will become a place of national and international significance that collects, conserves and protects the important cultural associations between people and place.

The Roxy will stand as a “pilgrimage point for every Greek Australian in the country and for every Hellene in the world,” said Poulos. He has already received interest from people in Athens and America who want to come visit. “It’s a memorial for all that cafe culture, that shop keeping generation, that whole generation out of which most of the current wealth for Greek Australians originated. The Roxy is also a memorial to the Hellenic influence in Australian history,” he said.

The 75th anniversary of the Roxy will be celebrated on the weekend of April 9 and 10 with the official launch of the Peters & Co Cafe and the Roxy museum, film screenings in the Roxy Theatre and historic tours of the Roxy. On the Saturday night, a panagiri type festival will be held with the black-tie gala ball with a twist. Alongside Greek band Ha Va Le, people will take to the streets dancing, singing and smashing plates.