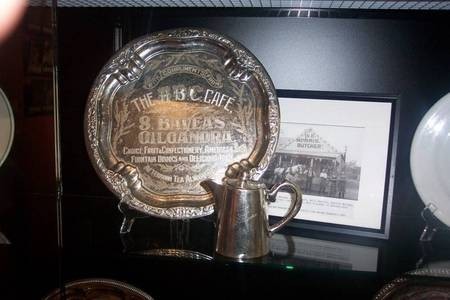 5 families - the Pentes, Sklavos, Kelly (Yiannakellis), Psaltis (Protopsaltis), and Poulos (Tzortzopoulos) - lived in close proximity to each other - culturally, residentially, and commercially.

Gilgandrians have a very warm regard for Kytherians. I was not surprised therefore, when I ventured into the recently opened Cooee Heritage Centre in Gilgandra, to find a glass showcase, on an entire wall, devoted to displays derived from mostly Kytherian Cafes and Shops.

The photograph above is one of the displays of food utensils - a Serving Tray and Tea Pot - from the ABC Cafe, Miller Street, Gilgandra.

It pre-dates my up-bringing in the town. And the ownership of the ABC Cafe by Paul and Chris (nee Yeryopoulos, Potamos) Kelly.

The Baveas's history of ownership of the ABC unfolds like this:

Stavros Con Baveas, left Potamos, Kythera as a 20 year old in 1908. He spent a few years as a cook for the Cordatos' in Dubbo, prior to establishing the ABC Cafe in Gilgandra in 1910. Stavros Baveas ran the ABC for the next 17 years, with assistance from his brothers and his nephew Con Coroneos. In the 1916 census, he is listed as a Restauranteur and his brother, Sotiros Baveas, aged 31, is listed as a cook, in Gligandra. The ABC then passed to a H. Baveas, who ran it for two years.

In 1928, it passed to Emmanuel Theo Peter Georgopoulos, pronounced "Yeoryopoulos" - Manuel Poulos. In 1934, Manuel asked his sister Chrisannthe, "Chris", to leave Potamos, Kythera, to come to Australia, and help him run the ABC Cafe. In 1939, in a trip to Bombala, Chris met, fell in love with, and subsequently married, Paul Kelly.

Manuel's brother Peter, after selling up in Casino in 1936 spent about a year with Manuel and Chris at Gilgandra before returning to Kythera. Tragically Manuel suicided in 1939/40(?).

My unverified guess is that ownership of the ABC Cafe passed to the Kelly family at this time.

The above history is based largely on information from Peter Tsicalas - submitted to other parts of the kythera-family web-site.

Paul and Chris Kelly ran the ABC Cafe from 1940 until Paul's premature death on May 3rd, 1961. In her own inimitable, indomitable style, Chris Kelly continued to run the shop, with assistance from daughter Stella, and son-in-law David Aird, until 1979. At this time, as Robyn Walton, attests, "..they closed the doors on a Gilgandra tradition." Mrs Chris Kelly was 71 years of age.

The ABC was a very large cafe, by Australian standards. Other than purpose built cafes that cater for functions, it was probably the largest cafe that I have ever seen in Australia. Its breadth encompassed three shop frontages, and the building extended back to virtually the back boundary. The rear contained a large kitchen, billiard room area, various storage areas, Cool Rooms, and accomodation spaces.

For reasons I do not understand, the Gilgandra Baveas's do not appear in the 1916, book - Life in Australia. There are references in that book to Ioannis and Panayiotis N. Baveas, from "the small country town of Barraba, in New South Wales", and to Kyriacos Baveas, (Narrabri and Tingha), who went back to fight in the Balkan Wars, and John Baveas of Narrabri. But no reference to Stavros and Sotiros, from Gilgandra.

Surely one of the Baveas' descendants - a grandaughter or grandson, a grand-nephew or grand-niece, could provide us with more valuable information and photographs of Baveas's ownership of the ABC Cafe?.

The long and intriguing history of the ABC Cafe has yet to be fully explicated on kythera-family.

One of my motivations in submitting these entries about the ABC Cafe is to try and encourage family members to submit photographs of the shop and its owners in their heyday - photographs from yesteryear.

About the Cooee Heritage Centre

The Coo-ee Heritage Centre, Gilgandra's Cultural Heritage Centre, was constructed in 2001 and aims to harmoniously represent the cultures and lifestyles, past and present, of the people of the Gilgandra district in a setting conducive to providing education and entertainment.

The Centre demonstrates local major events of regional, state and national significance. Exhibitions include the Cooee March Collection, the Australian Collection and a plotted history of Gilgandra. The Centre is located on the banks of the Castlereagh River with the Gilgandra Visitor Centre.

The architectural design reflects Reconciliation with the Koori Gallery at one end, the European History Gallery at the other with a neutral exhibition space in the centre. The Centre features rammed earth walls and floors, corrugated iron and water tanks. It brings the two cultures together in a peaceful and artistic manner providing a truly enjoyable experience for all visitors.

The middle exhibition space features travelling exhibitions, local artists displays and themed presentations about Gilgandra district, so no two visits to the Centre should ever be the same.

The Gilgandra Visitor Centre is also located within the building. Another aspect of the complex is the Rural Museum, just 200 metres from the Visitor and Coo-ee Heritage Centre. The Rural Museum offers a peep into yesteryear with its vast collection of agricultural artifacts, historical buildings and fascinating stories. Just look for the huge windmill out the front on the Newell Highway. The Rural Museum is open weekends and school holidays between 10am and 4pm with admission being Adults $4 and children $2.

You may also wish to take a stroll into town along the 'Windmill Walk'. A beautiful avenue of trees and local windmills that meanders along the banks of the Castlereagh River towards the centre of town. There are picnic facilities right along the walk with cafes and service stations on the other side of the road offering a variety of snacks and meals.

The Centre is open to the public 7 days a week from 9am to 5pm. Admission is currently free while the displays are being finalised. Bus and school groups are welcome and are encouraged to make a booking at the Gilgandra Visitor Centre on (02) 68472045 or Email the centre at

I have vague recollections of Jack Pentes shop, and going in to buy lollies when I was a very young child. The Monterey Cafe also holds some memories but vague, and the premises is now owned by a good friend of my mothers. It is the ABC Cafe, and the Kelly family, that invoke the clearest recolections. I played my first pinball machine in the ABC, and played my first game of pool in the room out the back. The milkshakes and Bodgy Bloods (Coke, icecream and raspberry cordial), the compressed flat ham and tomato sandwiches, the 50/50s Orange juice and lemon juice, they were lifes great pleasures for a "PreTeen" Lad in a country town. It all seemed so cool and so grown up, as often I was taken to the Cafe by 1 or more of my 4 older cousins, who I thought were the "coolest kids in town". I remember the large cement goldfish pond that you had to walk past out the back of the cafe to get to the toilets. "Old" Mrs Kelly is still alive and lives in Dubbo. She must be a grand age by now. [Approx 94 in 2005]. Her Daughter Stella married David Aird and they ran the Cafe as a family business for many years. At some stage maybe late 70's or early 1980's, Stella and David turned the cafe into a small supermarket, and since then I think the business has changed hands a couple of times. Their eldest daughter, Kristie, is the same age as me - 39 - and as such our families were, and remain close friends. My recollections are scattered, but clear. My mother has spend more than 60 years in Gilgandra, and remains close friends with Stella, who now lives and works in Dubbo. [Township 40 miles to the south-west]. As with all good friendships they are a part of what combines to make you the person you are. My mother Helen, still lives in Gilgandra. I am sure that she would be willing and interested to share some of her memories... PS.. While as a kid I hardly knew what an olive was over time my tastes have developed to adore a good olive, Green, Black, or??? .. A few years ago on Holidays in Gilgandra I noticed a heavy crop of olives on a tree in a backyard/Footpath of a house I think was owned by Jack Pentes. I returned with a 10 litre bucket and filled it, pickled the harvest and enjoyed the result. Thanks Kytherians.