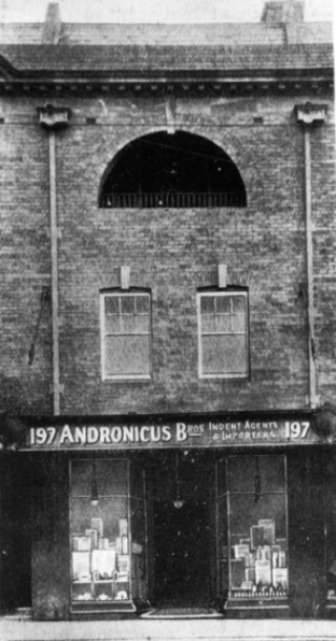 "...From the Kythiran village of Mylopotamos came seven Andronikos brothers, of whom four built up a tea, coffee and chocolate business which, eighty years later, is still eminent in the beverage and confectionery field. Their interest in tea and coffee and in emigration is said to have been aroused by an uncle, Dr Karydis, a medical officer of the Suez Canal Company.

In 1907 Charles and Emmanuel Andronicus opened a small shop at 127 York Street in Sydney. Charles visited Calcutta and Colombo and brought back chests of tea and coffee, and fish-frying oil and crockery and fancy goods. Emmanuel, armed with samples, travelled by train around New South Wales, seeking orders from Greek and other shop-keepers for tea, coffee, olive oil, sauces, crockery, cutlery and other items, advancing credit where appropriate.

As their business grew, Charles became a kind of unofficial arbitrator in disputes between up-country Greeks, and a mouth-piece for their grievances.

Ioannis, the youngest brother, after a month at Port Said with his uncle Dr Karydis, arrived in Sydney when he was 13 and lived with his brother Mick in West Maitland, where, for lack of English, he had difficulty in studying at school. When
Mick sold his cafe and moved to Sydney, Ioannis went to brother Nicholas in Tamworth, where he had a happy year at the local convent school.

Nicholas meanwhile had taken in as partner another brother, George, who had landed in Sydney in 1907.

In 1910 Charles, Mick and Emmanuel, joined by John, moved Andronicus Brothers from York Street to 197 George Street, where three of them lived in rooms over the shop. Young John was instructed in the techniques of tea and coffee blending and of packing goods for dispatch.

Mick returned to Greece and in 1912 Nicholas and Antigoni settled in Sydney, where Nicholas managed the Marathon Cafe at 72 Oxford Street. George Andronicus then joined forces with a cousin, Georgios Potiris (who had come to Australia in 1902 and had worked at Barraba), and bought the large Apsley Hotel in Walcha, which they managed until 1919.

Now 19, John Andronicus helped Emmanuel with up-country sales, working the towns near the Queensland border. With his friends John and Antony Notaras he went fishing and shooting at weekends, and on one such excursion his rifle accidentally discharged. The bullet passed close to his heart but John Notaras got him onto a horse-cart and into Grafton, where Dr Page (later Sir Earle Page of the Country Party) operated on him and saved his life; and after three more operations in Sydney he recovered.

After early difficulties, and by prodigious efforts, Andronicus Brothers prospered and its partners played important parts in the Greek community.

Other Andronicus relatives also arrived in Australia before 1915, including Stylianos, who partnered his brother-in-law Panayiotis Kominos in shops in Lismore and Muswellbrook and in a cattle property, and Kharalambos, who had the Club Cafe in Toowoomba.

Another cousin, Mikhail Potiris, who, like his brother George had been persuaded by an Andronicus to leave Mylopotamos for Australia, worked with George Potiris in Barraba and later had a shop in Queanbeyan, but sold it in 1914 and eventually became the second Australian Greek to graduate in medicine".