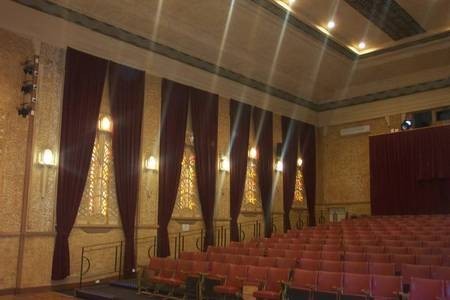 Back to the flicks after a 36-year intermission.

The opening of Bingara's Roxy Theatre in the Depression years must have seemed a symbol of a great future for the small town in north-western NSW. In fact, it was a folly - a glorious one, but one nevertheless doomed to failure.

Now the Roxy has reopened, and the theatre is again the hope of the town.

Alex Cross, [a local of the town], was 14 when the Roxy opened. "All during my school days we used to come here of an evening."

Admission was sixpence, and the treat was a Big Penny ice-cream. Westerns and Popeye cartoons were the staple fare.

"There wasn't much love stories in those days." So did he bring girlfriends to the Roxy? "I wasn't a lover", he said, adding that he came with his sisters.

But the Roxy struggled, battling for patronage against the REgent Cinema down the road, which had better access to Hollywood movies, and closed in 1958.

THe last Jaffa rolled down the aisle as television was coming to Australia. The Roxy's art deco beauty was largely hidden behind a cafe.

In 1999 the council bought it, with the help of a $100,000 grant from the NSW Government. The interior remained remarkably intact. But is still required $300,000 of the council's money and grants from the federal and NSW governments to restore the ornate plasterwork and original paint finishes and to build a new backstage area.

It's one of a number of country cinema's reopening, thanks to government funding and a new business model which relies on government restoration grants, council ownerships and support and volunteer workers.

The Roxy is now the home of the North West Theatre company and regional theatre performance course.

John Wearne was mayor when the council bought the building.

"A community our size can go in two different directions," he said.
"Thet can lie down and die and be negative and complain....or they can be progressive, look forward and play to their strengths."

"We have done all that. We examined tourism as a way out for us and I'd say when a small community like Bingara stops having a project like the Roxy, it's the beginning of the end."

Bob Carr [Premier of the State of New South Wales] came to Bingara at the weekend, the first premier the town has seen in a generation, to officially open the Roxy and see a showcase of regional talent.

He also announced another grant, this one to replace the roof and provide insulation.