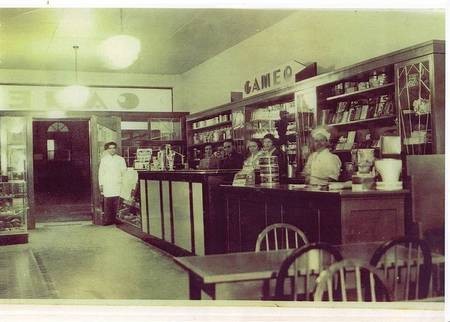 This photo sits on the counter of the Cameo café, now a shrine to Elvis, and the current owner says the people featured are ‘mostly’ Critharys. But the suited bloke behind the counter looks suspiciously like George Nick Combes, dating the photo at ~1937 or earlier. George established or acquired the Cameo sometime after rebuilding his Paragon café, further south on Rouse Street, in 1925.

Harry John Crithary initially landed in the early 1920s and went to work for his cousins, Nick and Harry James Crethar, in Lismore before acquiring his own café at Deepwater and/or Emmaville in the late 1920s. He returned to Karavas 1934/35 and came back to Tenterfield to work for George Combes (bestman at the wedding of Nick James Crethar and Florrie Vic Panaretto 1932) at the Cameo in 1937, buying the business about a year later. Allegedly he was joined by his brother Jim from America just before the war.
Harry died in Athens in 1963, aged 60, whilst on a trip back to Greece, and the Cameo went to his sons who held it until the late 1970s when it passed out of Greek hands.
Harry’s son Jack arrived in 1938 and his son Peter in late 1939. Peter however, moved on to Stanthorpe to work for Minas Crethar in the Empire Cafe for a short while before settling permanently in Woodenbong with his father’s brother Peter in late 1940.
Harry’s wife Anthea (nee Faros?) and his daughter Kalomira joined him in Tenterfield in 1954 followed by his son Jim in the late 1950s after completion of his national service. Allegedly Anthea was unimpressed, only staying for a short period before returning to the Elvis-free zone of Karavas, but over the years did a number of trips back and forth.

This photo also features in Maria Hill’s thesis at http://www.cybernaut.com.au/greeksinoz/
And is shown in this section about 5 pages back.

For a 2001 view of the Cameo see the photo at
http://nla.gov.au/nla.pic-an23608370
As at 2004 the place has remained virtually unchanged from the 1939 photo - except for the removal of the centre row of tables and a few other mods.[And the placing of a statue of pre 15 stone Elvis at the front door.]

For a good overview of Tenterfield, Greeks and Cafes read the book ‘Immigrants in the Bush’, details of which are under the bibliography section.

I am pretty sure the woman second from left is my late aunt Sophia Coombes nee Prineas and the man in the suit next to her would be her husband George Coombes.

submitted by
ELENI KATSANI-CONSTANTINOUDI-CRITARY
on 12.04.2013

The years do not add up.... Harry Crithary was my grandfather, my mother was Kalomoira. She was born in 1928. My giagia was a Skekos/maurogiannis/paneratos i think they have a tie with aigina. My mum kept saying they had come on the last crossing and then the shipping lines closed. FOR THE WAR at that time i vividly remember saying that my uncle jim just made it and none of the three boys were ever conscripted into the greek army after papoys carefull planning.. .. They had left greece then with giagia and did a bit of the journey by plane and then caught the boat. ??????//