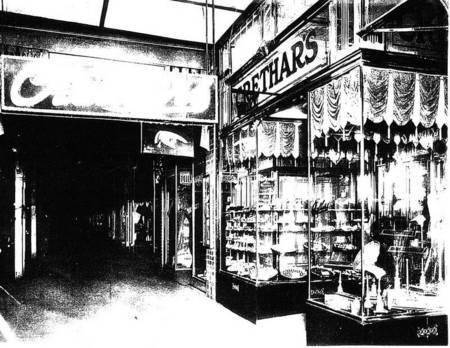 Angelo Victor Crethar arrived from Ballina in 1923 and acquired the ‘Busy Bee Café’ of George Patrinos in Woodlark Street, revamping it into ‘Crethar’s Sundae Shop’ and trading as Crethar Bros in silent partnership with his brother Menas, who turned up from Tamworth in about 1925.
In 1926 Angelo also acquired a tearoom business in Molesworth Street, one shop up from Theo George Fardouly’s ‘Olympia Café’. Here he established another Sundae shop which became the ‘New Sundae Shop’ in 1929 and further evolved into ‘Crethars Café’ a year or so later when he acquired the shop next door and expanded his premises.
In 1927, the year electricity first came to Lismore, he opened a third Sundae Shop in Keen Street, trading as Crethar & Crethar, the second bloke believed to be Harry Nick Crethar.
In 1929 he took in Nick Angelo Crones as a partner in his Woodlark Street shop, allegedly divided off from the original one owned by he and Menas, and thereafter traded as Crethar & Crones from that outlet.
In about 1930 he took in Greg Jacob Londy as a partner and established the ‘Star Court Milk Bar’ in the arcade adjacent to the Theatre, just down from his Molesworth shop.
In 1935/36, sometime after selling out of the Keen Street business, he established the ‘Vogue Milk Bar’ adjacent to the newly built theatre on the river side of Molesworth, where he was again in partnership with Nick Crones.
In the meantime the elaborate Olympia had become a white elephant in the Depression shakeout, going belly up around 1930 and leaving a vacuum at the top end of the market. Angelo gradually crept into this upmarket niche in a series of small makeovers of his Molesworth shop. It’s believed the second storey was added around 1933 and by about 1935, when Lismore could again sustain a ritzy establishment, was Lismore’s leading restaurant, with salubrious café downstairs and posh eatery, with silver service, on top.
In 1939 it became the first air-conditioned business in the region and, naturally enough, was rechristened ‘Crethar’s Air-Conditioned Café’. Queues formed halfway down Molesworth Street during summer waiting to be accommodated. After the destruction of the 1945 flood the restaurant was again renovated and made even more opulent, becoming the favoured social venue of Lismore’s glitterati upon being awarded the North Coast’s first restaurant liquor licence in 1946.
He sold the business in 1956 and after about 10 years retirement in Lismore and Sydney settled in Ballina, where he died in 1974.

Angelo was a foundation member of the Lismore Rotary Club, a stalwart of the Golf Club (secretary-manager 1956 to 64) and became the defacto leader of the Northern Rivers Greek community through to about the end of the war. Thereafter he withdrew from community affairs and upon the reformation of ‘The Greek Community of Lismore’ in about 1948 his brother Eric became President, and remained as such for 4yrs until passing the baton to Leo Manias, who in turn passed it to Charlie Anthony Sourry who wore the mantle until 1970 when the organization folded. Eric’s son, ‘Young Harry’ Crethar, is now the Defacto General of the remaining Northern Rivers Greeks.

At the beginning of the war Angelo organised the North Coast Greeks to contribute liberally to a fund to purchase a fighter aircraft for the Commonwealth and upon the invasion of Greece was instrumental in setting up other funds for the Greek war effort. One such meeting at his café in late 1940 raised £210 within minutes for ‘The Central Greek War Relief Fund’ and a permanent committee, consisting of Peter Manias, Nick Crones, Len Sargent and Lou Katsaros, was formed to raise and administer further collections. A couple of weeks later he was the keynote speaker at a function hosted by Murwillumbah Rotary at which he amazed everyone by using some contraption called an epidiascope to outline the history of Greece and the progress of the war. He was well supported at the function by a large contingent of Greeks from all over the Tweed, Brunswick and Richmond districts. It was probably he who instigated and organised the post war visit and civic reception for Peter George Poulos of Katoomba and Anagyros Stratigos, the Greek Government envoy, in the quest to personally call upon each of the next-of-kin of North Coast soldiers buried in Greece.