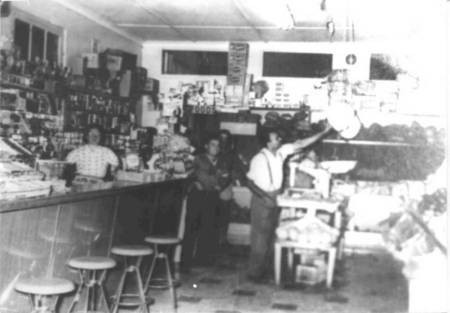 One of only two photographs of the Gilgandra Fruit Mart that I have in my possession.

The other photograph has also been submitted to kythera-family.

I (Con George Poulos, Costandinos Tzortzopoulos, Hlihlis, originally of Karavas, Kythera, Greece), am adjusting one of two scales we had in the shop in the centre of the photograph.

Brother-in-law Nick Coroneos is in the background to the left, and behind him (obscured) is Alan "Nuts" Palmer, brother of Beryl Palmer, who is standing behind the milkshakes and chocolates counter further to the left. Alan worked for me as the driver of the Fruit and Vegetable truck, which drove around the town, 6 days a week, calling on numerous customers.

Photograph of the truck, with Nick driving

When I visited the shop in 2004, the scale was still in use at the rear of the shop.

In 2004 I was pleasantly surprised to find the Gilgandra Fruit Shop still operating, and still economically viable. I had established the shop at 42 Miller Street, Gilgandra in 1959, and to see it still operating 45 years later, pleased me immensely.

View of the interior of the Gilgandra Fruit Shop in 2004

The Kytherian presence in Gilgandra, and the Kytherian business history of the town has been well explicated.

Kytherian presence in the town of Gilgandra, NSW