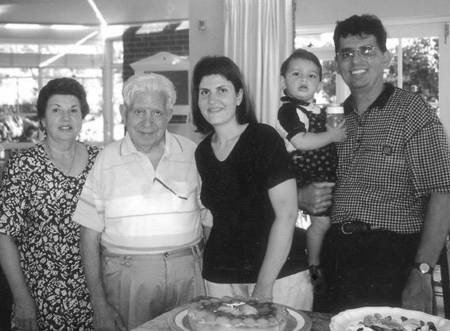 THEO Kepreotes with his wife Anna, and daughter Maria Notaras. Maria is married to John Notaras, Engineer and developer, whose family, also Kytherian, originally hails from Rockhampton in Queensland.


GREEK National Day was last week celebrated in both Greece and Australia and by Greek communities globally. Greek National Day commemorates the formal proclamation of the Greek War of Independence against Turkish rule on March 25, 1821.

GUNNEDAH is a progressive town with a proud Greek heritage, which is slowly being lost as younger generations become more Australianised and move away from the district.

Many local residents have fond memories of growing up in Gunnedah where the Greek cafes were part of the social scene and a meeting place for out-of-towners.

Theo Kepreotes was just 10 years old when he came to Australia in 1937 but Australia was not ready for migrants, he says, and he did not go to school.

Most of Gunnedah's Greek immigrants came form the Greek island of Kythera and when Theo left town to start his own business in 1949, there were 90 Kytherians living and working in Gunnedah.
"The White Rose and the Busy Bee Cafes were being operated by the Zantiotis family and the Monterey was operated by Nick Souris and Theo Zaharias," said Theo.
Theo recalled that the first two Greeks to come to Gunnedah were by the name of Comino and Panareto, who operated a cafe, known as Cominos, near the Acropolis Cafe site.
"They came in the early 1900s but I don't know what year," he said.

"The three Mellita Brothers arrived in Gunnedah around 1910 and in 1913 built three shops at 162, 164 and 168 Conadilly Street. They were double-storeyed with residences above each shop."

Theo says the shop at 168 Conadilly Street became the Acropolis Cafe which seated 140 people with a staircase to the upstairs section which could seat as many as 230.
"It was used for wedding receptions, birthday parties and other celebrations," Theo recalled.

"In 1923, my uncle Emanuel Kepreotes and his business partner, Peter Veneris, bought the Acropolis from the Mellita Brothers and I believe it was in the late 1920s when they bought the whole building. They ran the business until 1945."

Theo remembers names like Kennedy, Orlands, Gardner, Worboys, Rogers and Cavanagh as familiar families who utilised the Acropolis Cafe.
"These farmers used to come to Gunnedah from Kelvin, Wean, Emerald Hill, Curlewis and Mullaley in sulkies - not like today when everyone has a car and it takes no time to come to town," he said.

According to Theo, the Greeks would work 18 hours a day, seven days a week, supplying fruit, groceries and smallgoods and they would also cash cheques for farmers out of banking hours.
"In my uncle's cafe we used to turn over 1000 pounds a week," said Theo.
"We sold rump steak, two eggs and chips, with mashed pumpkin or salad for sixpence and milkshakes for two pennies."

For the first two years, Theo was only allowed to pick up empty plates from the tables and wash glasses.
"After that I was allowed to wait on tables and I remember being very excited when two families gave me a tip of two pennies because I was so young," Theo recalled.
"My uncle, who was single, brought me up to be straight, with no gambling or drinking. My word had to be my bond and I had to respect my elders."

Emanuel Kepreotes had a big shed in the yard behind the Acropolis where he kept fodder to sell to farmers and it was here that many of the local footballers would work out with improvised punching bags.
"My uncle and his partner sold the business in 1945 to Peter Venardos and his brother-in-law, Theo Souris, who is the father of George Souris, the Member for Upper Hunter," said Theo.

Theo Souris came to Australia in 1937 leaving his wife, Kanela, and two children in Greece. Just when he was preparing to make arrangements for them to join him in Australia, the war intervened and Greece was over-run.

Theo enlisted in the 113th Heavy Aircraft Mobile Workshop Unit in 1942 and served until the end of the war.
The long-awaited re-union with his wife and family finally took place in 1947 after he and his brother Con had joined Peter Venardos in the Acropolis Cafe.
Peter Venardos and Theo Souris worked the Acropolis in partnership until 1957 when Peter Vernardos converted the White Rose Cafe he had acquired from the Zantos Brothers in 1954, to Gunnedah's first supermarket - Thriftway.

Theo Souris was joined in 1954 by his elder son Peter, better known as Charlie.
Charlie says he was also put to work washing up during his early days at the Acropolis and over the years many fellow countrymen and other immigrants were given a start at the Acropolis while they learned to speak English.

Charlie remembers living in a flat upstairs in the GSBC building when he first came to Gunnedah and then later in a house opposite the tennis courts before his parents bought the old ambulance station house behind the former doctors' surgery in Marquis street.

According to Theo Kepreotes, his uncle had three other brothers in Australia, including Theo's father, Jim, who bought a farm with one of the brothers across the river, just before Gunnible.
The property had been operated by RJ Aitken. It was worked by 40 Chinese immigrants and was considered the largest tobacco-growing plantation in Australia.
Jim Kepreotes purchased the property in 1933 and worked it until 1966 when it was sold to the late Jim Studdy.
Like his brother Emmanuel and his fellow countrymen, Jim Kepreotes was passionate in his love for Gunnedah and its people.

"My uncle and his partner split their investments in 1963 and Veneris took the building with the Acropolis Cafe," said Theo.
Emmanuel Kepreotes died in 1973 and his brother Jim died in 1991.
Theo Kepreotes inherited the remaining buildings and although he left Gunnedah in 1949 to start his own business, he still retains a great love of the town.
The Acropolis, meanwhile, continued to flourish, with Theo Souris gaining a reputation as a kind and gentle man who was also very involved in the community.
Theo Souris was a member of the Rotary Club of Gunnedah and a keen supporter of local sporting activities, including soccer where he and Peter Vernardos put the Acropolis Cup into play many years ago.
He died suddenly in 1980 at the age of 64 and Charlie Souris ran the Acropolis Cafe until December 1992 when it was taken over by the Chip Inn's Nick Aliferis.
The Acropolis Cafe closed its doors forever in the mid-1990s ending a proud chapter in Gunnedah's Greek heritage.

Produced by permission of the author Ms. Marie Hobson, and the editor Ron (Rocky) McLean. I thank them both deeply.
[G.C.P].

I have always found the Greeks fascinating. I grew up In Gunnedah where
we had constant contact with Greek cafe owners at the Busy Bee, Acropolis,
Monterey, Tourist and White Rose Cafes and the Chip Inn. There was also a little cafe near the Civic Theatre which I believe was run by Greeks. I think it was called the Oasis but that is a story I will be following up later.

I have always loved the beautiful, friendly nature of the Greeks.

As teenagers we were allowed to call them by their first name, and they were
always happy to see you. My parents were wonderful Christians and we followed their example in treating everyone the same, so there was never a thought of discrimination. I know many families suffered from it when they came to Australia.

I have always loved Greek history and mythology and the country holds an
irrestible lure for me. I hope to visit it in the next few years.

You are doing a great job with the website.


As with many other photographs of Kytherians and Greeks in Gunnedah, the original photograph is held in repository at the:

The Historical Societies of local town's, particularly well organised ones, like this one at Gunnedah, often hold very valuable Kytherian and Greek-Australian, source material.

Wonderful people are the Greeks. I came to know a family who had a hardware store in Marrickville when I was restoring a house in Leichhardt. When I told them I was going to Greece on holidays, I was told I had to go to Samos to visit Georges parents. I always thought Samos was his family name as that was the name of the business. Of course I didn't speak Greek and they didn't speak English, but we had a great couple of days there. Max de Mestre-Allen JP