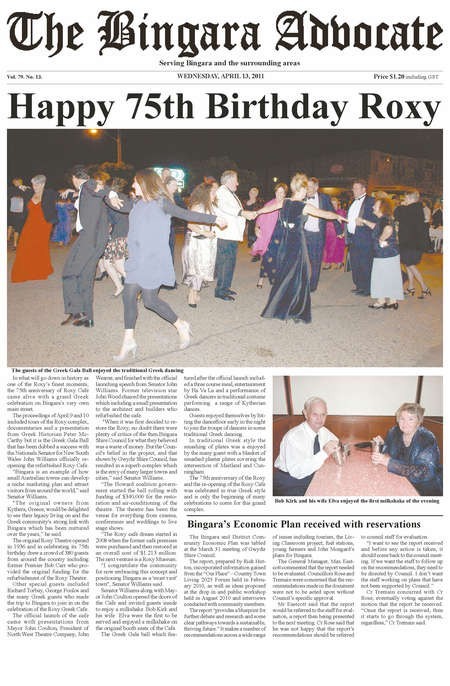 In what will go down in history as one of the Roxy’s finest moments, the 75th anniversary of Roxy Café came alive with a grand Greek celebration on Bingara’s very own main street.

The proceedings of April 9 and 10 included tours of the Roxy complex, documentaries and a presentation from Greek Historian Peter McCarthy but it is the Greek Gala Ball that has been dubbed a success with the Nationals Senator for New South Wales John Williams officially reopening the refurbished Roxy Cafe.

“Bingara is an example of how small Australian towns can develop a niche marketing plan and attract visitors from around the world,” said Senator Williams. "The original owners from Kythera, Greece, would be delighted to see their legacy living on and the Greek community's strong link with Bingara which has been nurtured over the years,” he said.

The original Roxy Theatre opened in 1936 and in celebrating its 75th birthday drew a crowd of 380 guests from around the country including former Premier Bob Carr who provided the original funding for the refurbishment of the Roxy Theatre.

Other special guests included Richard Torbay, George Poulos, Victor Kepreotis, Kathy Kepreotis, George Vardas, Theo Poulos, Angelo Andrew, Michael Mallos and the many Greek guests who made the trip to Bingara to join in on the celebration of the Roxy Greek Cafe.

"When it was first decided to restore the Roxy, no doubt there were plenty of critics of the then Bingara Shire Council for what they believed was a waste of money. But the Council's belief in the project, and that shown by Gwydir Shire Council, has resulted in a superb complex which is the envy of many larger towns and cities,” said Senator Williams.

“The Howard coalition government started the ball rolling with funding of $340,000 for the restoration and air-conditioning of the theatre. The theatre has been the venue for everything from cinema, conferences and weddings to live stage shows.

“The Roxy café dream started in 2008 when the former café premises were purchased and then restored at an overall cost of $1.213 million. The next venture is a Roxy Museum. “I congratulate the community for now embracing this concept and positioning Bingara as a 'must visit' town", Senator Williams said.

Senator Williams along with Mayor John Coulton opened the doors of the Cafe and invited guests inside to enjoy a milkshake. Bob Kirk and his wife Elva were the first to be served and enjoyed a milkshake on the original booth seats of the Cafe.

The Greek Gala ball which featured after the official launch included a three course meal, entertainment by Ha Va La and a performance by Greek dancers in traditional costume, performing a range of Kytherian dances, led by Marcus Megalakonomos.

Guests enjoyed themselves by hitting the dance floor early in the night to join the troupe of dancers in some traditional Greek dancing. In traditional Greek style the smashing of plates was a enjoyed by the many guest with a blanket of smashed plaster plates covering the intersection of Maitland and Cunningham.

The 75th anniversary of the Roxy and the re-opening of the Roxy Café was celebrated in true Greek style and is only the beginning of many celebrations to come for this grand complex.