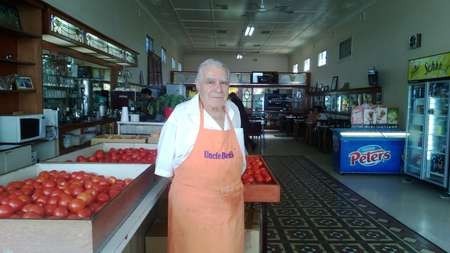 Paul Calokerinos at the front of the Canberra Cafe, Manilla, NSW.

This was a road trip to see places visited a long time ago where I usually didn't stop long enough to see their history, as I went thru them to go camping or shooting. Now stopping and having a good look around I was quite surprised on how many Greeks and especially Kytherians have contributed to our rural heritage.

We left Sydney early and went to Gunnedah on the way to Bingara. Even Gunnedah had its share of Greeks in the town contributing to the town’s economy. There were quite a few Kytherians who lived here and their involvement in Gunnedah’s history has been commemorated with some of the council car parks named after them such as Kepriotes, Fatseas, Casey(Cassimatis), Vernados, Melitas, Comino , Zantiotis and Souris. Most of them have now gone, but their contribution to the town’s history is well documented and still evident.

From there we stopped at Manilla to say a short hello to Paul Calokerinos, the proprietor of the Canberra Cafe who is a remarkable man, a living legend, well liked and has been there for 63 years. The longest ever Kytherian ownership of a cafe worldwide. He epitomizes country hospitality at its best and you will be left with an impression of how wonderful he and his family are.

He has been in Manilla since he was 17 years old. A remarkable effort to be still working at his age, Paul, Helen and family are not planning on retiring yet. Paul says when he gets old he may slow down a bit but not yet. We were treated like royalty and he showed us around the shop. He was preparing for the official opening of his recently refurnished Canberra Café, which took place on Sunday 31st March at 2pm, as well as preparing to celebrate a tribute to "Jack Smiles" the founder of the Cafe in 1927. The cafe has undergone a 6 month refit to bring the furniture and walls back to what it looked like when it opened in the early 1900's, by Jack Smiles.

We arrived in Bingara late, after a lengthy stop in Manilla. Paul’s story is quite remarkable and you just can't leave, but want to stay and listen and be enthralled by his life's journey through his time in Manilla. So when going past Manilla, stop and have a break and say hello to Paul and his family.

After arriving in Bingara where we spent 3 full days exploring this beautiful spot. Bingara is truly a remarkable place and the Roxy Theatre is a testament to the vision that the three Kytherian partners had in such an isolated region of NSW back in 1936. What were they thinking when they built this beautiful art deco theatre. If the Roxy was built in any other larger city it may have survived its initial opening. But now after it's renovation and back to it's original state it's quite a draw card to Bingara. The adjoining Peters Cafe is a must to visit also. Pictures can't show how really beautiful the Roxy is. You just have to go and see it for yourself. We met George Poulos there on Friday who showed us around Bingara and the Roxy.

On Friday we met up with another Kytherian, Loula Cass from Sydney, who was also visiting Bingara.. She was heading down to Manilla also for the festivities on Sunday.

George Poulos showed us firstly the "Living Classroom" in Bingara. The Living Classroom is an ecological "wonderland", a research centre and showcase for the future of agriculture the city and country living. It is an inspiration for regional, national & international visitors, a centre for education and for experimentation for all generations, and for all levels of learning.

The project will turn 150 ha of degraded town Common land, into a highly productive "food forest – combining a wide range of agricultural activities with horticulture, aquaculture and forestry. It works with the synergies between these activities. Its focus is on food quality, and the connection between soil health, plant and animal health and human health.

The Kytherian Association has first bite at organizing a garden to grow what ever they choose. The learning centre and accommodation at the site have just been completed and school groups are already attending lectures and field days.

In the afternoon we headed for Delungra where we were to meet Sandy, the Roxy manager and her husband who manages a large cattle farm. We were shown how they feed and organize the feed lots for the cattle before they go to the abattoirs. We stayed onto the evening where we enjoyed some more country hospitality.

Saturday was Roxy Day and a good look at Peters Cafe. Firstly we had a look around Bingara town r before going to Peters Cafe for Lunch and met up with George and Sandy, who were to show us around the Roxy and the Museum upstairs. The Museum is to collect any memorabilia from any Greek who has owned a cafe or restaurant. This is to showcase how the Greek influence of cafe ownership was etched into Australia's history. Now how many country towns had a Greek cafe in it? I gave Sandy a plate and a couple of cups and saucers from my fathers Cafe in Rockhampton the "Orion Cafe" to be placed in the museum.

We then went downstairs to see the Roxy theatre and I was gob smacked, as the theatre is really something else in real life. How they built something so lavish and awe inspiring out here is still beyond belief. We had a good tour of the theatre by George as Sandy, which was preparing to show the movie "ARGO" that afternoon. So after our Roxy introduction we sat and watched this great movie in the Roxy and what a movie it was.

Sunday we left early after a big Peters Cafe breakfast for Manilla, for the Canberra Cafe festivities. The party and celebration was to start at 2pm. All went well with locals lining the street early and family and friends arriving. There were a lot of people, apart from locals, that came from all over such as Sydney, Brisbane and Canberra. They estimated around 800 people attended. This just shows how much Paul is patronized and loved by the local community. The street was closed for the occasion and a stage erected on the back of an old dodge truck, with an old 1929 Essex behind, just to add to the atmosphere of the occasion reminiscing the era gone by when the cafe had opened.

The speeches were first, and then some local singers sang some old favourites. Then the Greek dancing began in the street out in the front of the cafe. This went on for a few hours with light refreshments being served. We had a short break and then the second round of festivities began with a sit down dinner for about 160 invited guests in the Restaurant next door. This reminded me of my childhood growing up in Rockhampton where families came together to celebrate a special occasion in similar fashion. Paul was absent for quite a while as he wanted to cook the food himself with a lot of help from some the ladies.

After the meals we had the speeches from friends and locals talking about their association with Paul and Helen and their family. Paul even gave us a bit of history on how he came to Australia.

Remember if you are driving through Manilla stop at the Canberra Cafe and have a chat with Paul, an icon of our Greek cultural history here in Australia. You will come away with a lifetime of knowledge that not many people have experienced from one of Kythera's true heroes that have come to this country we live in and are still here to share it with us.

And what about Bingara. All I can say is just go and see BINGARA for your elf the Roxy and Peters Cafe is another example of how Kytherians have influenced rural Australian culture. There have been similar establishments wherever you went over this great country. When travelling just stop and look around and you will see what I am referring to. With the Museum in Bingara collecting memorabilia and being able to showcase these amazing stories of the Greek influence we will not have lost the history of this facet in Australia’s past that is slowly diminishing.
Remember the Museum in Bingara is collecting any memorabilia to do with cafe /Restaurant ownership by the Greeks. So if have anything, please hand them in. It will be opening later this year and we are planning to be there and when we know the date we will let you know. With the numerous numbers of Greek ownership of cafes there should be quite a few people going to the opening. Ring Sandy McNaughton from the Roxy Bingara for any info 02 6724 2066.

It is amazing how the early Greeks went so far to establish themselves and integrate with the Australian way of life but still keeping their heritage alive.

Well done all Kytherians we should be proud of ourselves. ……..