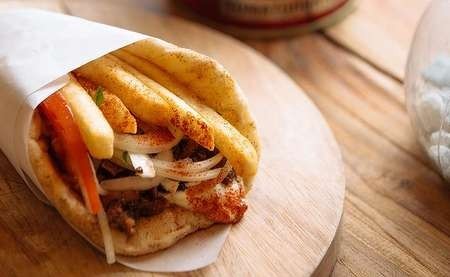 Ah, the good old souvlaki - that simple combination of fresh pita bread, char-grilled meat, a little salad and a dollop of tangy tzatziki. On paper it sounds light, fresh and healthy and yet this humble meal is often given greasy mistreatment and relegated to the shabby role of booze sponge, dispensed and gorged messily when you're either horribly hungover or well on your way to becoming so. But not any more.

Like a taco sold on a Mexican street corner, souvlaki is Greece's national street snack and, since Melbourne has the world's largest Greek population outside Greece, it's no wonder the souvlaki has a special, and unshakeable, place in our late-night hearts.

Here's a bit of souvlaki nerdery for you. Here, we think of souvlaki as referring to the whole beast - the meat, salad and pita - but the word ''souvlaki'' actually refers only to the skewers of meat. They started being sold from stands and shopfronts in Greece in the 1950s, but there is evidence dating back centuries of skewered meat being cooked over coals, so it's possible Socrates may have had a cheeky souva on his way home from a night on the philosophical turps. If you're a purist, you order a souvlaki pita or a gyros pita. In Athens and southern Greece, souvlaki is more commonly referred to as ''kalamaki'', meaning ''little reed'', so you would order a kalamaki pita in those parts.

Given this city's hefty Greek credentials, how authentic is a classic Melbourne souvlaki?

''For us, the original souvlaki is pita bread, pork, tzatziki, tomato, chips and onion. This is the real souvlaki. You come to Greece, this is what you'll get,'' says Thomas Deliopoulos who, along with wife Sylvia Gabriel, runs Oakleigh's buzzing Kalimera Souvlaki Art. Gabriel notes that sauces can vary from region to region and tzatziki is not always the automatic choice.

''Where we're from, in the north of Greece, you have a choice of dips. When I was a kid, I used to have homemade mustard.

''It's street food. For example, one electrician has one job and has to feed one family, so it's a complete meal, with protein, carbohydrates and vegetables.''

Melbourne's versions are also much bigger than the originals. Where we often serve unwieldy two-handers, rolled tightly in paper and ready to burst, the authentic version is smaller and should just be gently folded in your hand like a soft-shell taco.

''When I first came here and they wrapped it, I ate the paper,'' Deliopoulos says.

So why do we favour the classic lamb filling over the more authentic pork version here in bacon-crazy Melbourne?

''When the migrants came from Europe, lamb was very cheap,'' explains Gabriel.

''They could buy a whole lamb for a few dollars, so that's why they changed to use lamb, not because it was lamb in Greece.''

Deliopoulos's parents were both pig farmers.

''I know the anatomy of the pig. One pig is big, big story for one family, one village even. So we know very much the story of the pig.''

He pulls out a picture of a pair of pale, soft shoes with delicate laces. They are the shoes his grandfather made out of pig skin, the same grandfather who shared his secret marinade recipe with Thomas, the same marinade he bastes the souvlaki with here in Melbourne in 2014.

Deliopoulos uses only female pigs under 70 kilograms (male pig meat can have an off-putting smell and is better minced in dishes). He doesn't use pork belly, as it's too fatty.

He has pitas made to his recipe at a local bakery and has fresh oregano flown over from his parents' farm.

Even though souvlaki is essentially street food you can eat with one hand, that hasn't stopped a wave of souvlaki restaurants from springing up, and not fluorescent-lit takeaway joints, but pleasant spaces with energy, atmosphere and bright, clean food.

Kalimera has a casual, jovial atmosphere, with groups of friends clustered around repurposed wooden-wheel tables. Kalimaki in the city is a crisp white space with accents of scrubbed-back turquoise wood, while George Calombaris' Jimmy Grants in Fitzroy, with a brand-new offering in the Emporium Melbourne, is equal parts laid-back, buzzy and intimate, with low stools and a pumping takeaway window.

''What we do here is a new trend even in Greece,'' says Gabriel. ''Because of the financial crisis, people can't afford to go out to restaurants, so the fashion is to design a nice, trendy shop with really good, cheap food. So you combine quality with atmosphere, music … before, the souvlaki was nice, but the shops were nothing, but what we do here is the fashion in Greece too.''

Here are 10 favourites that showcase a souva for all seasons and Melbourne's enduring love of this perfect street food.

Making old school new school: This souvlaki restaurant recently expanded into the shop next door, so now you can sit in the rustic dining room with brightly painted wooden shutters, light bulbs dangling from thick pieces of looped rope and old black-and-white family photos. The pork souvlaki ($8) is the go-to dish, but the Cretan salad is a must too, as well as the tangy house dip.

Nouveau souveau: Slip up a side street off Smith Street and look for the blue neon cross. Push on into this lively little shack spinning souvas for a new generation. The Patris ($9.80) has prawns, honey mayo and cucumber and comes with the added crunch of a hefty fistful of fresh mint and coriander, while the Homer ($7.50) features falafels with Greek yoghurt and Hellenic slaw.

King of the pub crawlers: Many a Brunswick Street reveller has wandered in during the wee hours (it's open until 5am at weekends) to sit among the laminated newspaper clippings and devour a no-nonsense, king-sized souvlaki. The Hangover is a standard number pumped up with added cheese, bacon and chilli.

Food truck souva: Greek Street Food started its engine in January this year and trades six days a week around town. Owned by the same fine folk who brought Pireaus Blues to Fitzroy, these super-authentic souvas - the Oink, the Cluck, the Bahh and the Veggie - use Mr Pitta breads and free-range meats. You can also get a side of chips tossed in oregano and feta, and you should.

Cabbie's choice: If there's one group of people you can rely on for a good souva recommendation, it's Greek taxi drivers. A recent ride and recommendation from Yanni led to Richmond's Hellenic Bite which also feeds the lunchtime corporate crowd. It's a spotless little place with decorative olive oil cans, a Grecian mural on the wall and squat, juicy souvlaki ($12.50) on bread by Mr Pitta. Ask the friendly owner to squish a bit of one of their lush house-made salads in for good measure. (Thanks for the tip, Yanni.)

Roadside find: Along the Airport West tram line, in a light industrial area, shines a juicy beacon called The D's Souvlaki, serving pleasingly plump, succulent and charry souvas ($10), as well as pitas doused in Nutella and strawberries ($7), to send you sweetly into the night.

Vegetarian star: Falafels are the usual vegetarian fall-back but at white, bright Kalamaki in the CBD, you can get chickpea keftes with salad, tahini and yoghurt ($8), as well as a simple haloumi version ($8). Kalamaki also gets extra points for serving ''virgin tzatziki'', which saves you heading back to your desk with the workplace hazard of deathly garlic breath.

Cafe style: Who says you can't have a dainty souvlaki for lunch? At Demitri's Feast, a jaunty Greek cafe, you can get plump pita swaddling tender calamari, with crisp rocket, flecks of pickled green peppers and - wait for it - ouzo aioli ($13).

Local favourite: Wedged on an awkward corner, you'll find Pete's, cooking chicken and lamb over smoking coals. The Pete Special ($11) is the equivalent of the perfect hamburger with the lot - lamb or chicken (or both) with haloumi, an egg over-easy, chips, tomato, onion and lemon mustard sauce. It's smoky, tangy, oozy and crisp, and not too big either, so you can enjoy every roller-coasting mouthful. It ain't called Special for nothin'.

Hall of fame: No list of souvlakis would be complete without a nod to Stalactites, that 24-hour eatery that has been at the heart of Melbourne's Greek precinct since 1978. Every local and every tourist has, at some time, shuffled into the doorway, waiting for a table and a straight-up souva ($12.50) at 3am. Just play nice while you're there, OK?

Make your own pita

In a large bowl, mix one cup hot water with two teaspoons instant yeast until the yeast dissolves. Add 2½ cups plain flour, two teaspoons salt and one tablespoon olive oil and knead the dough, either in a mixer with a dough hook or by hand on a floured board, until elastic. Place the dough in a lightly oiled bowl, cover with cling film and leave it to rise to twice its size (about an hour). Turn the risen dough out onto a floured surface, break into eight pieces and roll each piece into a disc about 20 centimetres in diameter and 0.5 centimetres thick.

Put a cast-iron frying pan on a medium heat with a little olive oil to coat. When the pan is hot, place the disc of dough in it and cook until bubbles start to appear. Turn it over and toast the other side for a couple of minutes, then flip it back and cook for another couple of minutes. It should be puffy and have nicely toasted spots on it.

Remove when done and repeat with the remaining pitas.