My beautiful cafe: the Greek tradition that united a town 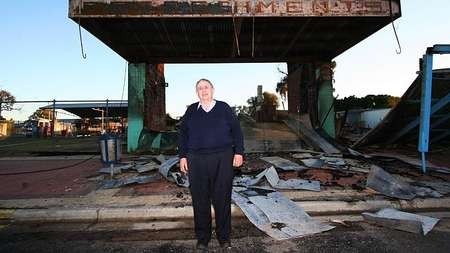 
THE Cafe De Luxe in Brewarrina was one of the last of its kind.

Not so long ago, there were Greek-Australian cafes in every other country town in NSW and southern Queensland. They were an institution, too, in the main streets of the cities. The term “cafe” can be misleading: these had more in common with US diners than coffee shops of today, or the fish-and-chip shops of the 1980s.

On Sunday night the Cafe De Luxe — built in 1926 and run by my uncle Angelo — was razed. The Pippos house adjoining the business was also destroyed. Angelo Pippos said yesterday: “I’m devastated ... This is the only home I’ve ever known.”

My grandparents Thalia and George, migrants from the island of Ithaka, owned cafes in Mungindi, Goondiwindi, Dirranbandi and Brewarrina in western NSW. By the late 1970s, only the Cafe De Luxe in Brewarrina was left in the family, and the cafe institution at large was an endangered species.

The Greek-Australian cafes have mostly disappeared because they were never meant to last. The cafes were designed to produce middle-class children, like me. The destruction of the Cafe De Luxe is an unseemly end to this tradition.

The beautiful art-deco in­teriors, the scales for lollies, the silverware, the saloon doors, the soda fountains, the booths, the jukeboxes, the quirky signs (“Our Motto: cleanliness and civility”) — it’s sad to see these institutions destroyed, first by time, now by fire.

Some historians suggest the Greek-Australian cafe was a “Trojan horse” on the main streets of early and mid-20th century Australia, bringing American food culture to town. There may be something in this, but the mixture of British, American and Mediterranean influences made for a very pointed Australian institution, especially in the bush where cafes were often the only places open seven days a week, 7am until late.

In Brewarrina, the De Luxe was the heart of an often-troubled town. It was a place where everyone — Anglo, indigenous, Euro­pean, Asian — sat down together for a meal. Customers will remember what the old cafes didn’t offer: there was no Greek food. The mixed grill and T-bone steak were preferred, and everything came served on oversized, oval plates. For dessert, you ordered a sundae.

But at the De Luxe, for Sunday lunch, the extended family pushed tables together and my grandmother would serve the food she loved as a girl in Greece: meatballs in egg and lemon sauce, stuffed tomatoes, fish in currants and vinegar, all the salads — the dishes packed like wedges on the table.

One final memory: at the back of the De Luxe there was an enormous olive tree, about 6m high, which somehow had thrived in the outback soil. As a boy I spent hours in that tree, and if you climbed to the top you could see across the main street of Brewarrina, over the houses, down to the river, where the town returned to the bush.

The olive tree, now dead, is almost too obvious a symbol for the Greek-Australian cafe institution: these businesses nurtured something new in our towns, they thrived, they had their time, and now they are almost all gone.