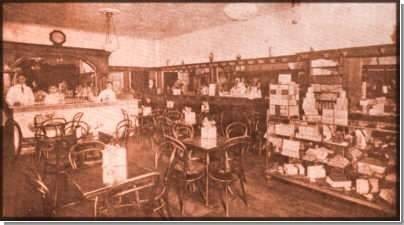 Zachariah Simos came to Australia from Greece as a young, orphaned boy. It is said that he got employment selling fish in Kings Cross, and in 1916 he came to Katoomba and leased the property on which the Paragon now stands.

An existing Devonshire tea room was taken over and transformed into a Viennese cafe, modelled on a similar establishment which the late Mr. Simos saw while holidaying in Austria.

The original cafe was refitted in 1925 in the then popular Art Deco style and was later extended by the addition of the Banquet Hall in 1934 and the Blue Room in 1936.

While the tea room, still in its original state, is classical in its simplicity, the Banquet Hall decor shows strong pre-Columbian influences. The Blue Room by contrast, is in the International style and has overtones suggestive of the interiors of those marvellous ocean liners of the day, such as "Queen Mary" and "Normandie".

Of the many soda fountains, milk bars, tea rooms and cafes built in Australia between the two wars, few were as sumptuously finished, and none could compare with the 'Paragon'. It is doubtful that any still exist, finished in a similar style, for it has remained unaltered with even its displays and the packaging of its confectionery reflecting the era in which it was created.

The fame of the 'Paragon' for its quality as a restaurant, for its interiors and for the excellence of its cakes, hand dipped chocolates, candies and fudges, is well earned and make it a most valued part of our national estate.