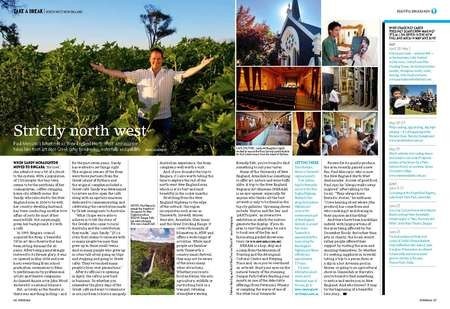 When Sandy McNaughton moved to Bingara “for love”, she admits it was a bit of a shock to the system. With a population of 1300 people, the tiny town seems to be the antithesis of her cosmopolitan, coffee-swigging home city of Melbourne. But Sandy, who relocated to the New England area in 2004 to be with her country-dwelling husband, has been conducting another love affair of sorts for most of her married life. Not surprisingly, given her background, it’s with a café.

In 1999, Bingara council acquired the Roxy, a beautiful 1930s art deco theatre that had been sitting dormant for 40 years. After being painstakingly restored to its former glory, it was re-opened in May 2004 and now hosts everything from school graduation ceremonies to films to performances by professional artists and theatre companies.

Acclaimed Aussie actor John Wood declared it a national treasure. But, as lovely as the theatre is, there was one thing lacking – and for the past seven years, Sandy has worked to set things right.

The original owners of the Roxy were three partners from the Greek island of Kythera and the original complex included a Greek café. Sandy was determined to restore and re-open the café, along with an upstairs museum dedicated to commemorating and celebrating the contribution made by Greek immigrants to Australia.

“What I hope we’re able to achieve is to tell the story of the Greeks who came to rural Australia and the contribution they made,” says Sandy. “[It’s a story that] seems to resonate with so many people because they grew up in these small towns. And so many people who grew up in cities talk about going on trips and stopping and going to Greek cafés. They’ve touched many people’s lives over generations.”

After its official re-opening in April, the café is now back in business. So whether you remember the glory days of the Greek café and want to reminisce or are just keen to have a uniquely Australian experience, the Roxy complex is well worth a visit.

And, if you do make the trip to Bingara, it’s also worth taking the time to explore the rest of the north-west New England area, which is at its best and most beautiful in the cooler months. Stretching from the New England Highway to the edge of the outback, the region incorporates such areas as Tamworth, Inverell, Moree, Narrabri, Armidale, Glen Innes and the Great Dividing Range. It covers thousands of kilometres in NSW and offers a wide range of activities.

While most people are familiar with Tamworth’s country music festival, they may not be aware of the area’s many other attractions. Whether you’re into food and wine, the arts, agriculture, wildlife or just kicking back in a tranquil, relaxing atmosphere among friendly folk, you’re bound to find something to suit your tastes.

Home of the University of New England, Armidale has something to offer art, nature and wine buffs alike. A trip to the New England Regional Art Museum (NERAM) is an eye-opener, especially for anyone who thinks all the best artwork is only to be found in the big city galleries. Upcoming shows include ‘Hinton and the Sea’ and ‘pARTicipate’, an interactive exhibition in which the visitors generate the display. If you do plan to visit the gallery, be sure to book one of the fun and fascinating guided showroom tours
www.neram.com.au

NERAM is a hop, skip and a jump from the Museum of Printing and the Aboriginal Cultural Centre and Keeping Place and, once you’ve overdosed on artwork, feast your eyes on the natural beauty of the stunning Dangar Falls before feasting your mouth on one of the delectable offerings from Peterson’s Winery or sampling the wares of one of the other local vineyards.

Known for its quality produce, the area recently gained a new fan, Paul Mercurio, who is now the New England North West Ambassador. A lover of good food, Paul says he “always walks away inspired” after talking to the locals. “They always have fantastic stories,” he enthuses. “I love hearing about where [the produce] has come from and who’s making it and sharing in their passion and hardship.”

And there have been hardships indeed, with large portions of the area being affected by the December floods. But rather than pity or charity, the locals would rather people offered their support by visiting the area and enjoying themselves. So whether it’s seeking sapphires in Inverell, taking a trip to a pecan farm or a dip in a hot Artesian pool in Moree, or going to an agricultural show in Gunnedah or Narrabri, you’re bound to find something to entice and excite you in New England. And who knows? It may be the beginning of a beautiful love story…

From Sydney, head to Newcastle and on to the New England Highway, Maitland, then along the Kamilaroi Highway and arrive at the southernmost part of New England, Quirindi, in around four hours.

For more information about events and to download maps of the area, go to
www.newenglandnorthwest.com.au

Whip cracking ? Caber tossing ? Scare crow making ? It’s all on offer in the New England area in May and June

Kick up your heels – and your kilts – at the Australian Celtic Festival in Glen Innes. Centred round the Standing Stones, the festival includes parades, strongman events, music, dancing, Celtic foods and more.
www.australiancelticfestival.com

Watch celebrity chef cooking demos and sample a vast array of regional produce at the Moree On a Plate festival of food, art and wine. Moree Secondary College.
www.moreeonaplate.com.au

Try local produce and help local causes at Uralla’s Unique Markets. Only stallholders who make it, bake it or grow it themselves are allowed to have stalls and money raised goes to charities in the area.

Photographs (in the .pdf):

Paul Mercurio reveals the breadth of his passion for New England produce.

Dangar Falls has water plunging 30m over a basalt wall.

Café culture: Sandy McNaughton (right) worked to ensure the Roxy (above) paid tribute to its first Greek owners from the island of Kythera.