Plaque presented to Panayoti Zantiotis by the Gunnedah Shire Council 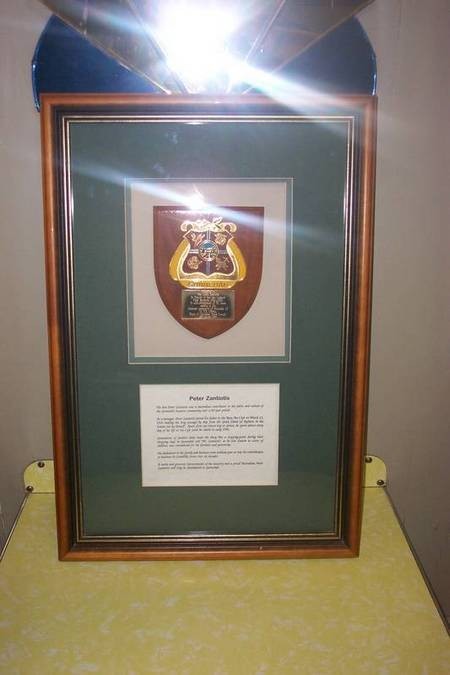 Plaque presented to Panayoti Zantiotis by the Gunnedah Shire Council, resting on a laminate table top at the Busy Bee Cafe.

The late Peter Zantiotos was a marvellous contributor to the fabric and culture of the Gunnedah business community over a 60 year period.

As a teenager, Peter Zantiotis joined his father in the Busy Bee Cafe and on March 15 1936, making the long passage by ship from the Greek island of Kythera, in the Ionian Sea, by himself.

Apart from one return trip to Greece, he spent almost every day of his life in the cafe, until his death in early 1996.

Generations of families have made the Busy Bee a stopping-point during their shopping days in Gunnedah, and "Mr Zantiotis", as he was known to scores of children, was remembered for his kindness and generosity.

His dedication to his family and business were without peer, as was his contribution to business in Conadilly Street, over six decades.

A warm and generous representative of his ancestry, and a proud Australian, Peter Zantiotis will long be remembered in Gunnedah."


The trophy holds pride of place in Theodora - "Loula's" - 'office' at the rear of the Busy Bee Cafe.

My mother would say - "to cumaroni" - Loula holds it dear to herself - as a mother holds her baby. She is very, very proud of it