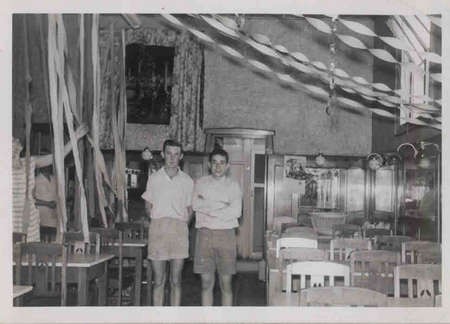 The museum will include photographs such as the one above. This photo was taken inside the Roxy Café around 1960 when it was managed by Jim Loulias. It features Bingara local Merv Hall (left), and Steven Loulias, Jim’s son (right), taken around Christmas.

What's On at The Roxy?

A number of Greek visitors travelled to Bingara in February, to witness first hand, the exciting developments of the Roxy Café. The visitors included Con and Dorothy Fardouly from Inverell; Peter and Judy Gianneas, formerly of Pete’s Place in Inverell; Paul Kalokerinos and his son John from the Canberra Café in Manilla, and George Kallitsis from Universal Catering in Sydney and Barraba.

As Greek café proprietors themselves, they all share a particular interest in the exciting future of the Roxy. They recognise that the Roxy is a symbol that epitomizes the Greek migration experience.The visitors share the collective experience of Greeks immigrants es¬tablishing cafes in rural Australia; either through their parents, as in the case of Con and Dorothy Fardouly, or first hand, as in the case of Peter Gianneas and Paul Kalokerinos, who immigrated to Australia over 50 years ago.

Many people will remember a visit to the Fardouly café in Inverell. Located in Byron St, it was an institution for generations whose memories readily evoke the treasured experience of visiting the café and all that it entailed. The fixtures and fittings from the Fardouly café will be reinstated in the Roxy Café which will serve to ensure that the Roxy is restored as faithfully as possible in keeping with cafés of the period.

The Fardouly’s story, along with those of other Greek proprietors from the region, will feature in the Roxy Café Museum which will be located upstairs over the café. The museum will be housed in the rooms that originally served as the sleeping quarters for the management and staff when it was built in 1936.

The Roxy Museum will celebrate Greek immigration to rural Australia. It will pay tribute to the remarkable legacy of the Greek Cafe by recognising the significant contribution Greek immigrants made to the changing landscape of rural Australia. The museum will also serve as a research and education centre accessible to school groups from Kindergarten - Year 12, tertiary students, and members of the public.

Merv Hall worked at the Roxy Café for a number of years and was around 18 years old when the photo at right was taken. Merv recalls Saturday evenings when The Roxy Café was the most frequented in town. He recounts how it was so popular that queues would form outside on the street. Patrons only gained admission when a table inside became available.

Among other selections, patrons enjoyed the fresh fruit freezes and banana splits served with wafer cones, crushed nuts and a variety of toppings. Being multi-skilled, Merv not only worked at a number of cafés in the town, but he also worked as an usher at the Regent when it was run by Bill Kouvousis. It was a common sight to see Merv roaming the aisles serving choc tops from a wooden tray hanging from his neck at interval.

Apart from this photo, very few old photos of the Roxy have come to light. We are seeking further photos and memorabilia and would appeal to anyone who may have my relevant material to include in the collection that will be housed in the museum.

The story of the Greek Café is a shared chapter in the histories of Greece and Australia, a chapter that is almost over. Very few Greek cafes operate as they did 50 years ago. Even fewer sites that incorporate a functioning cinema and café remain. We welcome any contributions to ensure that the story continues to be shared, and that it continues to live on for years to come.

1028:I knew him as John Loulias and he is alive and has posted a comment just recently! I hope he can make it to these celebrations in Bingara on the 9th and 10th april 2011