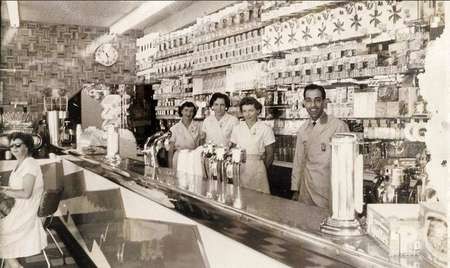 In the1940s, Zacharias Vretos Panaretos and his wife Theodora took over a shop at Kogarah near the railway station and opened a milk bar.

As Mr Panaretos used the name Jim Parry for business, the first Parry's Milk Bar was up and running.

Noel Kelly, 78, remembers it well. His family business, the St George Call newspaper, was "a stone's throw" from Parry's, so he was a regular.

"It was a gem; the only place open on the weekends and late at night," Mr Kelly said.

"It was a meeting place where you would go for a hot strawberry milkshake on a cold winter's night."

Young people of the day had a routine: a film starring Doris Day, Rock Hudson and Bing Crosby at the Victory Theatre on the other side of the railway line, then straight to Parry's for the American-themed food — the milkshakes, ice-cream sundaes, sodas and hamburgers.

"Everyone played sport, so we'd go to Parry's after the tennis, baseball and football at Jubilee Oval," Mr Kelly said.

He remembers wondering why the lights above the shop were left on at night in the lead-up to Christmas, Easter and Mother's Day.

"We weren't quite sure what was going on until we learned that one of the Parry brothers would sleep there to guard the shop as they had the biggest collection of boxed chocolates in the southern hemisphere," Mr Parry said.

"There was so much stuff, it needed to be guarded all night."

"We used to print the church papers once a month and on this occasion someone from the St Paul's parish council had designed an advertisement for Parry's Milk Bar to go on the back page," he said.

"He had drawn a girl with very short shorts, sipping a milkshake — the parishioners saw red. This was not the kind of thing to be seen at the back of a parish newspaper."

Although the Kellys were bought out of the business they had owned since the 1920s — "there was talk my grandfather won it in a poker game" — Mr Kelly stayed on until 2000, by which stage the newspaper was gone and it was a printing outfit.

But his interest in things Greek started way before Parry's Milk Bar. Mr Kelly has the distinction of being the great, great, great grandson of a man believed to be the first free Greek to hit Australian shores.

"There were other Greeks but they were convicts," Mr Kelly said.

"He jumped ship in 1832 because of some trouble at home, married a 14-year-old Irish convict girl and they had 11 children."

The Parry family opened more milk bars: Zacharias opened Parry's at Caringbah in 1958 and his brother Peter took over the shop at Kogarah. Their other brother, Theo, opened one at Rockdale.

Jim Parry sold the Caringbah business in 1969 to Peter and Bill Cassimatis, who were also Greek.

They ran the milk bar for 36 years before retiring. Tim Downs and Doug Battye then took over.

Mr Kelly and other St George residents familiar with Parry’s milk bars contributed stories and memorabilia to be included in a photographic exhibition, Selling an American Dream: Australia’s Greek Cafe, which opens at Hurstville Museum and Gallery this Saturday.

The touring exhibition from In Their Own Image: Greek-Australians, a national project put together by Macquarie University, explores an important chapter in the development of Australian culture.

Greek cafes were known for their introduction of American food into communities right across Australia.

The exhibition can be seen until September 28.

1441:Zacharias Vretos Panaretos was my grandfather.