Photos > Cafes, Shops & Cinemas > There was also a supreme gesture of reconciliation with the Turkish flag also on display 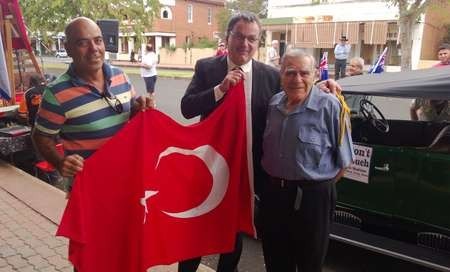 Ozzy was initially attracted to Manilla through his interest in paragliding and hangliding. Most people won't realise that Manilla has some of the best sites for paragliding in the world. The World Championships have been held there. Paragliding sites at Manilla. Ozzy decided to make Manilla his home.

Ozzy, and members of his family have a farm, called "Boxwood", which 11 kilometres north of Manilla, on the Barraba Road. Amongst other produce, they grow olives there.

Ozzy imported from Italy a wine press, that is housed at the property.

Paul Calokerinos also has a substantial olive grove at Manilla.

When it comes times to press the olives to extract the oil, the Turk and the Greek work together, utilising Ossie's press to perfom this task.

A great story of what can be achieved through cooperation and consilience.

Ossie allowed 3 members of the 4 Wheel Drive Club - John Tzannes, my cousin John Notaras, and myself - and "ring-in" George Poulos, to camp on his property, in a shed, overlooking a beautiful creek, and a rocky outcrop. That was a very interesting night.


Overview of the days events