Tim Russell, builder and principal of the company Dominico Blue 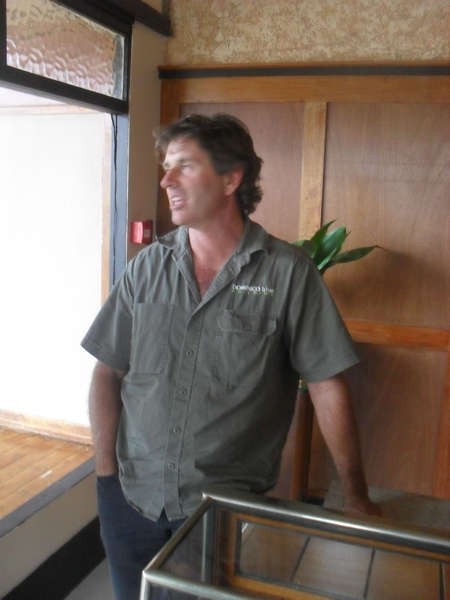 Tim put a great deal of love, devotion and surrender into the refurbishment of the Roxy "site".

This included not charging the job out at the correct industry cost - a form of very generous donation.

All persons associated with the Roxy site were very impressed not only by Tim's workmanship, but his beneficence as well.

We got to see the fruits of Tim's labour, on Dec 3, 2010 when the building works of the Roxy refurbishment were opened for viewing for the first time.

*Note that the Official Opening will occur on the weekend of the 9th & 10th April, 2011. Do find the time, and make the effort to attend.

The building works for the Roxy "complex", in Bingara, have now been completed, at a cost of three quarters of a million dollars. The Roxy complex now consists of a Tourist Information Centre, a Cinema & multi-purpose theatre, dance hall, & function centre, a Café, and a Museum.

From 2004- to date, Greek-Australians (G-A) and Kytherian-Australians (K-A), (and Kytherians - worldwide) have gained more than $3.3 million in funding from Anglo-Australian sources (3 tiers of Government), to establish what are G-A and K-A heritage, memorial, pilgrimage, and “sacred” sites. These grants have been applied to new construction and refurbishment of a very large building.

The Roxy Complex is a (massive) living, working memorial to G-A’s (1817-to date), and K-A’s (1854 – to date), who engaged in what Hugh Gilchrist called the “shop-keeping” phenomenon. Its history has been well documented by another Project part-financed by the Aroney Trust, Peter Prineas’ book, Katsehamos and the Great Idea.

This Project is unique in Australia and the world. It has no equivalent. Kevin Cork called G-A & K-A cinema’s in Australia “Parthenons down under”. This is a very apt description of the Roxy site. But it is now the supreme, Parthenon down under. It has to be seen to be believed.

G-A’s & K-A’s have been extremely lucky to win the equivalent of 3 Lotto prizes, and to have Anglo-Australians build and renovate this G-A & K-A memorial for them.

It is now time for G-A’s and K-A’s to make a small contribution to their memorial – and to build on their / our luck.

The Roxy Committee have not called for funds at this stage, however 3 Kytherian families, recognising the extreme importance of the Roxy site, have pre-emptively stepped up, and donated funds. These include Emanual Aroney and his brothers (grandsons of one of the original owners), $6000 to restore the original neon sign. Nick Politis, $5000 towards the Museum, and George & Lorraine Poulos, $15,000 towards the Museum. Many G-A’s and K-A’s have also already donated various pieces of “realia” (artefacts), such as malt-containers, milk-shakers, teapots, signage, doors, etc. This Museum is the perfect vehicle for ensuring that such important G-A and K-A realia is not lost to posterity, and can reach a wider audience.

The Museum comprises 4 small rooms, and a larger conference room (110 sq metres), on the first floor above the Cafe. It is accessible by stairs and a lift. It is fully renovated.

Funding to equip the Museum is far more difficult to obtain than building project funding. What is needed is technological equipment (television screens, computer(s) etc), and showcases to display the various pieces of realia.

It is important to ensure that when the complex and Museum opens it begins with a “bang” and not a “whimper”. Projects that begin with a whimper most often end up interred in shallow graves. In practical terms, if the 100,000’s of visitors who visit the Roxy every year, encounter an “empty” Museum, this has two results. Firstly their impressions of the Museum (and by extension, G-A’s and K-A’s) is diminished, and secondly, they tell another 30 friends and acquaintances that the Museum is not worth visiting.

It is incumbent on G-A and K-A individuals and institutions who / that have the economic wherewithal, to contribute as much as they possibly can, to ensure that the Roxy Museum functions at the highest possible level.

Cheques can be made out to