Photos > Cafes, Shops & Cinemas > Why I built a life-size replica of a 1950s town in my backyard 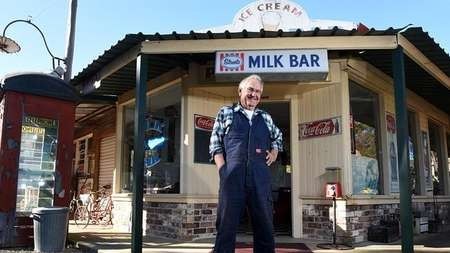 Cyril Robertson creates life-size 1950s town in back yard
Town includes milk bar, newsagent and general store
Mr Robertson inspired by his youth in Penrith
A desire to recapture the simple joys of his youth has led a Sydney man to create a life-size replica of a small 1950s Australian town in his backyard.

Cyril Robinson has transformed his old office and shed into milk bar Run’a’Round Sue’s, a replica of the old fashioned milk bars he frequented in Penrith with his sweetheart in his youth.

“It’s just something that I like because I had a great time in that era,” Mr Robinson said of the milk bar, named in honour of his wife.

“They were some of the best times we had in the 50s and 60s. We were always at the milk bars and that’s where Sue and I would go after school every day.”

The inspiration to build his own milk bar on his 5 acre block in the Penrith region arrived 19 years ago, when Mr Robinson’s grand daughter was born.

But he hasn't restricted himself to recreating just one of his loves, with a town gradually sprouting at the back of his property.

“It was a few dummy front windows built on the outside of his garage and then the speed shop started filling up and began looking like a proper 1950s speed repair shop and it was like you had walked back into the 50s,” daughter Renai Willoughby said.

“Then he started building this (the milk bar) for the kids and it all became real.”

Mr Robinson said he wanted to give his grand kids a taste of his youth.

“I used to like sitting in the booths having a milkshake listening to the music and I would pay my threepence and play Crash Craddock, Runaround Sue and Del Shannon,” he said. “I just built it for the kids mainly.

“I use it for the grand kids and if people come out to visit I will have a cup of coffee in there or a beer, it’s great in the summer.

“The milk bars in those day had real character back then.”

Missing for almost a decade, the big thong ridden by Kylie Minogue in the closing ceremony of the Sydney Olympics has finally been found: in Mr Robinson’s tiny backyard town.

It was left at Mr Robinson’s property by a friend a few years ago. The find comes as Ms Minogue yesterday starred in the closing ceremony of the Glasgow Commonwealth Games.