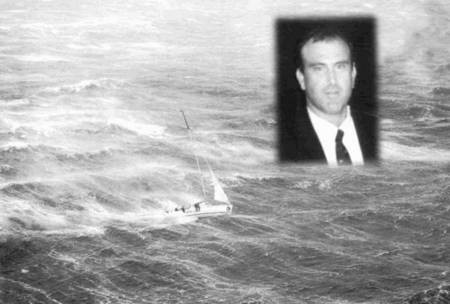 Edward (Ed) Psaltis has been inducted in the Hall of Champions category.

Edward (Ed) Psaltis was born in Sydney on 7 April, 1961. He commenced sailing at an early age on his father's (Bill Psaltis, (family parchoukli, "Ntessis", or "Ntessi"); yacht Lass O'Luss, and was a junior sailor with the Hunters Hill Sailing Club. Psaltis sailed in his first Sydney to Hobart yacht race as a 17-year old, and has since competed in eighteen of the races.

The high point of his career was winning first place overall aboard AFR Midnight Rambler in the storm ravaged 1998 Sydney to Hobart Yacht Race. (About which, more later in this entry).

Psaltis has represented Australia in the Sardinia Cup, and the Southern Cross Cup. Psaltis's many achievments saw him voted NSW Yachtsman of the Year in 2000. The selection panel chose Psaltis for this prestigious award ahead of members of the Australian Olympic Sailing team and recent world champions.

He twice won the Sydney-Mooloolaba race in the 30-footer, Nuzulu.

In 1999, Psaltis also won the the Gosford to Lord Howe Island Race with AFR Midnight Rambler, only the second yacht to win both the Hobart and Lord Howe Island races - Australia's only annual Category 1 ocean races.

Rescue Operation
Crew lifted off boats: 55 of which 55 were lifted by helicopter
Aircraft involved: 45 including six services aircraft
Surface vessels involved: three including HMAS Newcastle
Cost of aircraft and vessels chartered by AMSA - $650,000
No estimate of services costs.

Size, costs create turbulence in the wake of tragic '98 race

The sky is grey, the light is dull and nothing is shining on the harbour's edge at Rushcutters Bay. Ed Psaltis sits on the deck of his new boat, Midnight Rambler, and says Hobart's "age of innocence" is over. It was lost four years ago.

Psaltis won the Sydney to Hobart in its most tragic year, simply known around the Cruising Yacht Club as "98". He won it on handicap in a tiny Hick 35-footer on cruel seas.

"It was certainly a tough year, (a) very hard year; it was a difficult thing to win when people were dying," Psaltis said, slowly. "We didn't hear about it until the gale was all over, so we just kept pushing ourselves and got through it OK. It was a pivotal year; the age of innocence for Hobart was gone then."

Six lost their lives in that race and the subsequent events and inquiries have altered the event.
"It's certainly changed since . . . the safety was best practice then, but safety like most things evolves and gets better and while it wasn't bad in '98, what we've got now is a higher level of safety . . . but that's part of the problem; the average ...(punter).. can't afford the costs involved," said Psaltis, who will be sailing his 22nd Hobart.