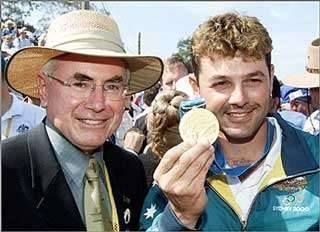 
In September 2000, through the initiative of the Millenium Heritage Council, the Church established the Greek Australian Sports Hall of Fame in order to record the sporting achievements attained by Australians of Greek heritage who have distinguished themselves at either a National or International level.

[One of the most noteworthy inclusions in the Greek Australian Hall of Fame is Ultra Marathon runner Yiannis Kouros, who recently set a new world record in France when he ran 434,386km, finishing more than 80kms ahead of the second best runner.
Former Socceroo captain Charlie Yankos, kick boxer Stan Longinidis, footballers Steve Malaxos and Anthony Koutoufides have also been inducted in the Hall of Fame].

So that the Hall of Fame remains a serious institute for excellence, it was announced on the evening of the Millenium Ball that the induction ceremony will be conducted every Olympic Games year whilst nominations mau be submitted during any year leading up to the event.

Inductions are classified into five categories with the highest including Gold Medalists at Olympic, World or Commonwealth Games, as well as World Champions, and World Record Holders.

During each Induction year, new nominations will be evaluated and appropriately endorsed. At the dame time, however, the Committee will examine the right of passage of existing Inductees whose more recent acievements may might warrant their promotion from one level to the next, or higher.

In addition, current Inductees not advancing to another level, may, nonetheless, have furthered their achievements, in which case the Committee is eager to receive relevant details in order to update its information.

After researching the various models for Sports Halls of Fame around the world, the Committee determined that the Greek Australian Sports Hall of Fame should be all-inclusive. Therefore, an important category includes veterans and masters sportspeople sportspeople so as to recognise their continuing commitment to the highest standards for their age, as well as juniors and youth, so as to inspire them to even higher accomplishments in sport.

For the past two years the Millenium Heritage Council has been working towards establishing a venue to house The Greek Australian Sports Hall of Fame with photographic displays and memorobilia of its Inductees. In conjunction with Rockdale City Council, in Sydney, such a 'home' for the Sports Hall of Fame has been secured by the shores of historic Botany Bay.

Located at the junction of Bay Street and the Grand Parade in the heart of Sydney's Greek quarter, and just fifty metres from the statue of Spyros Louis, the first modern Olympics marathon gold medalist, erected during sistership celebrations between the city of Rockdale and the City of Glyfada in Greece, the venue will also double as an Information Centre Supporting the Athens 2004 Olympic and Paralympic Games.

It is a serious and very costly project but one which has received widespread support from the community who have provided their time, services, and financial support for its completion.

In the meantime, the Millenium Heritage Council invites nominations for Induction or Promotion from any member of the community who is aware of new sporting achievements, together with supportive documentation either by way of appropriate certification, or press clippings, or authentic internet mentions.

Sportspeople may even nominate themselves should they feel that the Committee might not have discovered them.

Please read the following parameters carefully and nominate a Greek Australian sports achiever. Remember, nominees must have distinguished themselves at a National or International level.

Any Australian Citizen of Greek descent:

1. Who has been selected for or played in a national team for either Australia or Greece or any other Nation in any sport (e.g. soccer, rugby league, aussie rules, judo, karate, boxing, wrestling, basketball, tennis, cricket, netball, softball, surfing, chess, badminton, kickboxing, etc, or

2. Who has been selected for represented either Australia or Greece or any other Nation in any games discipline, indoor or outdoor, summer or winter (e.g. track and field, swimming, wightlifting, shooting, rowing, gymnastics, bowling, skating, skiing, bobsledding, sailing, diving, cycling, etc), or,

3. Who has won an Australian or Greek, or any other NATIONAL sports even, or

4. Who has held a national or international or world record in any sports event.

Please note that competitions, championships, tournaments or events restricted to ethnic background and not open to all citizens of a particular Nation are not eligible for consideration.

Candidates for the The Greek Australian Sports Hall of Fame may be:

Then contact The Millenium Heritage Council immediately with details for inclusion in 'Pinax, Volume II, and the Hall of Fame Display

providing name, address, contact number, (of the sportsperson, or their family), and precise details of sports distinctions for each candidate. N.B. Achievements must be verifiable!

The Next Induction Ceremony

Note the date in your diary from now: Saturday, 12th February, 2005, at the Wentworth Hotel in Sydney. It will be a night to remember - a night on which new Inductees will be recognised and appreciated for their excellence in sport.


The office for the Sports Hall of Fames is
located at

Based on an article that appeared on Tuesday 1st June, 2004, in O Kosmos, page 24. Our News in English section.

Reproduced with the kind permission of the Editor.