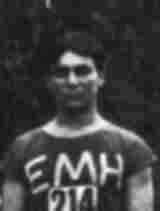 Many athletes of the original 166 are obviously of Kytherian origin - Psaltis's, Samios, Zantiotis, Andronicus: but the place of origin in Greece of many others - particularly those born in Australia - has not been indicated in the biographies outlined in the original list. (How would you pick Jack Lewis as a Kytherian?) Determining how many Kytherians were inducted in the original list remains a matter for future research. To further complicate matters, some of the athletes may have had a parent, or grandparent of Kytherian origin. (A good example is Stephen Girdis, inducted for sailing prowess, whose mother is Kytherian.)

Gerakitis was born in Kythera, Greece, and migrated to Australia in 1908. In Sydney he joined the New South Wales Sports Club's Gymnasium, before becoming a member of the Sydney Harriers, and amateur long distance running club based in Newtown.

In July 1909 he ran his first major race, billed as the Second Annual Open Race, from Parramatta to Sydney, which was later recognised as the first Marathon in Australia. Gerakitis finished third.

In 1910, Gerakitis took part in Queensland's first marathon, at the Australian Athletics Championships in Brisbane, and also in Victoria's first Marathon.

In 1911, Gerakitis joined the East Melbourne Harriers, (hence the EMH across his singlet), and entered Victoria's third Marathon, winning the event from a field of 34 starters, in a time of 2 hours, 59 minutes, and 30 seconds, just five minutes outside the Australian record, and twelve minutes outside the record at the time.

Selected to represent Australia in the 1912 Stockholm Olympic Games, Gerakitis rejected nomination because he would have had to renounce his Greek citizenship, something he was unwilling to do.

In 2000, he was inducted into the Greek Australian Sports Hall of fame.


For more detailed biographies, supplied by Hugh Gilchrist, and George Vardas, see other entries for Jack Lewis, in this Sporting Life section, and under People, subsection, High Achievers.