Nicholas Laurantus as patron of Grenfell Football Club in 1919. 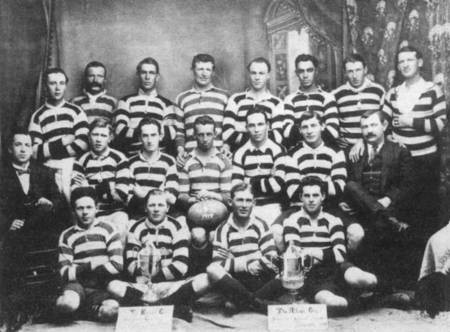 Nicholas Laurantus is suited, in the middle row, far left.

In 1918, Nicholas and George Laurantus sold the Railway Hotel in Koorawatha, and returned to Grenfell.

They had bought the Albion Hotel, an imposing building on a corner block in Main Street, almost opposite the Thermopylae Cafe. Nicholas was pleased to leave Koorawatha, for some of his customers — in the main, shearers — drank too heavily with unpleasant results.

Going back to Grenfell was like going home again. Nicholas knew the people and they knew him, welcoming him back as an old friend. He began to borrow books again from the Literary Institute library in the School of Arts and resumed his support for the town’s athletic clubs.

He became patron of the football club whose members made the Albion Hotel their regular drinking place. A contemporary photograph shows the team in their striped jerseys, having successfully defended the Albion Cup — possibly donated by Nicholas — posing with their solemn coach and, seated beside them, one leg crossed above the other, their no-less serious patron. Nicholas is a short, slim man in a dark, three-piece suit with watch-chain and bow tie. The face is full, the mouth wide and set firmly, with a full underlip, and the eyes are looking straight ahead at the camera. It is the face of an intelligent, responsible young businessman, the licensee of the best hotel in Grenfell.