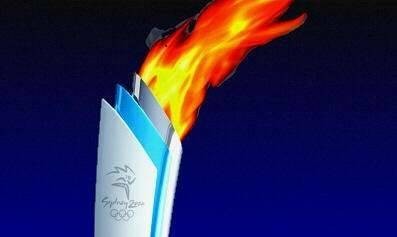 Do any Kytherians have photographs of "Kytherians carrying the Olympic torch in the Torch Relay, in Sydney; and in other parts of the world, June 2004"?

It was a day when Sydneysiders stopped and got reacquainted, and welcomed home what felt like an old flame from an affair we thought had ended at the Olympic closing ceremony in 2000.

On a day-long walk, run, jog, cycle, row nd roller-blade down memory lane, the launch of the 2004 torch relay - at 400 metres a leg - also offered reminders of "rolling road closures", "mother flame" and the creeping commercialism of the Games.

The day began at the Opera House, with the torch in the hand of Cathy Freeman, as it had been four years ago. Atop the Opera House steps, she raised it proudly against a stark blue winter sky, providing the perfect backdrop for the flickering rekindled orange flame.

The Premier, Bob Carr, not known as a disciple of big events, had recognised moments before that the torch relay was more than just another signal for a Sydney party.

He reflected on the different world of four years ago, before massive security measures were needed for host cities. It was "a world of less contention".

Yet the torch remained a symbol of peace, with Mr Carr pointing to the "flame to which we all still aspire".

Four years on, the world saw a more commercial Cathy Freeman, having struck a promotional deal with Samsung, along with Coca-Cola, the principal sponsor of the event.

The first of 3600 torchbearers in 33 cities and 26 countries appeared distracted as she ran. This may have been due to an attempt by the Seven Network to interview her through an earpiece during her most public post-retirement 400 metre run.

And if the crowds were sparse in some sections of the rambling route, organisers would have been delighted with the attendance of Greek-Australians, who poured into Brighton-le-Sands by mid-morning.

Botany Bay could almost have been the Aegean except, perhaps, for the presence of two bobbing NSW Water Police craft.

"We brought a part of Greece to Australia today, and I was proud be one of those who did it," said Rita Comino, a torchbearer who ran along Bay Street at Brighton-le-Sands.

"My parents are both from Kythera in Greece, the seventh state of Australia in case you didn't know."

With spectacular television pictures beamed around the world, including swimmer Kieren Perkins and skier Zali Steggall on the bridge, the International Olympic Committee might reconsider its edict that this will be the first and last global torch relay, because of it organisational distractions.

In one of the more touching moments of the day, Con Verevis, the first torchbearer for the 1956 Melbourne Olympics relay, completed his third run with the flame, a rare accomplishment. Mr Verevis, 70, who carried the torch in North Queensland 44 years ago, where he lives, said he wanted to run part of his 400 metres. In 1956 torchbearers needed to be able to run a mile in seven minutes.

As a bonus, Mr Verevis was reunited at kerbside with a second cousin, Bella Cass, whom he had not seen for 50 years.

"This is my third relay," he said, "and there won't be a fourth. I wanted to run because I've been training to run it back home by doing 400 metres uphill. I'm glad everything went well because though my brain was willing it hasn't told my heart and knees."

Mr Verevis, whose father migrated to Australia from Greece nearly a century ago, ran past a house which onlookers dubbed the "Greek embassy".

Angelo and Sonya Giourtalis explained that the house had been designed to resemble the Parthenon, complete with columns and new Greek and Australian flags in the front yard.

Except for a flat tyre on a truck carrying photographers, several flame blow-outs due to the wind and one brief stop so that a torchbearer could tie a shoelace - at a police officer's suggestion - the relay ran smoothly on the day Athens began moving the final section of its stadium roof into place. Along the route, some non global corporations couldn't resist the opportunity for some free exposure. "Our chicken burns eternally," read one sign outside a flame-grill takeaway shop.

By nightfall, the torch had made it to Sydney Olympic Park, carried by a dragon boat crew to avoid gridlock on land. It was then roller-bladed down Olympic Boulevard by the Winter Olympics gold medallist Steven Bradbury and the relocated 2000 cauldron was lit by Steve Waugh, who said: "I wish I was an Olympian."