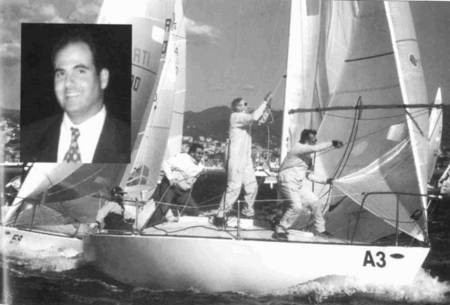 A good example is Stephen Girdis, inducted for sailing prowess, whose mother is Kytherian.

Stephen's grandparents on his mothers side were Steve and Helen Christianos - from Mylopotamos, Kythera. For many years they ran a mixed business in Boggabri, New South Wales. Boggabri is located in North Western NSW, lying halfway between Gunnedah and Narrabri on the main road north, which connects with the Newell Hwy. It has a current population of just under 1000.

Steve and Helen Christianos had three children, one of whom died young. The surviving daughters were Kanella, and Effie, Christian(os). Effie, is Stephen's mother.

Stephen Girdis has been inducted in the Roll of Distinction category.

Stephen Girdis was born in Sydney on 17 October 1960 and was introduced to sailing by his father at the age of 6, sailing at the Vaucluse Amateur Sailing 12 Foot Club. In his younger days he started on the Sabots and continued on to the Flying 11's, becoming an Australian runner-up in the Flying 11 class.

Girdis then moved up into the 12 foot skiffs and had a stint in the Olympic 470 class, before settling on the J-24 class - an international one design keelboat; perhaps the most popular keel boat. At this class in Australia he sailed at local, state and national regatta level.

He excelled in this type of category, and has represented Australia at the J-24 World Championships on four occasions, including at Sardinia, Italy; Buenos AAires, Brazil; Genoa, Italy, and in 2000 at Newport, Road Island, USA.

In 2000 he became Australian champion, after winning the J-24 Australian Championships, held at Lake Macquarie. Past winners of the event include Ian Murray. At the 2000 World Championships he skippered the Australian team. As of the year 2000, Stephen had sailed in one Sydney to Hobart race.

His uncle, Nick Girdis, CBE, also a sailor, introduced "Bill" Psaltis to sailing. Nick lives in Brisbane, and is also an inductee in the Greek Australian Sports Hall of Fame. Coincidentally, he too married a Kytherian.