The Greek Australian Rules Team of the Century. 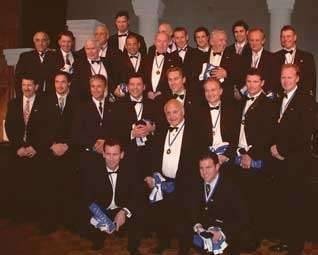 A unique assembly of Greek football talent. The 'Greek Team of the Century' group photo.

[Australian Rules is a uniquely Australian, fast flowing brand of football. It derives from indigenous Australian, and from Gaelic football influences. Initially it was used to maintain the fitness of Cricket players during the off-season.]

The Richards-Pannam dynasty, which boasts the greatest family record in VFL/AFL history, had an astounding five representatives in the team, including Ron Richards as coach.

Over 530 people attended the lavish black-tie event, including sports minister Justin Madden, Lord Mayor John So, media personality Red Symons, and most of the 55 VFL/AFL players of Hellenic background. Athlos patron and AFL CEO Andrew Demetriou was named on the wing. In his address he declared that "I doubt we will ever have this experience ever again in our lifetime".

TV news presenters Angela Pippos and George Donikian hosted the event. Pippos summed up the mood of the evening, announcing that, "The Brownlow is for blondes. But tonight is for brunettes!"

Over $50,000 was raised for the Hellenic Australian Sports Foundation scholarships, to be granted to young Greek sportspeople.

The Greek Team of the Century was selected by the Athlos committee, headed by chairman Chris Pavlou, the former Carlton winger and current board member. They also consulted football legends Ron Barassi and David Parkin.

There was a total of 55 players to choose rom, who played 3,521 games for 2,997 goals between them. Thirteen players represented Victoria, and eleven were premiership players. Murray Thompson MP presented the players with commemorative jumpers and medallions.

Peter Daicos and Anthony Koutoufides were named as vice-captains of the team. Daicos is one of the most revered players in the history of the game, and was named at Full Forward. He kicked 549 career goals, including 97 goals in Collingwood's famous 1990 premiership season. Daicos said he was proud to be there "to honour the sacrifices that my parents made".
Koutoufides is Carlton's captain, a premiership player, all-Australian representative and AFLPA award winner. He said. "It's a great honour for me to be presented with this and be alongside some superstars here. It's an honour that I'll look back at forever in my life."

Both proudly received their awards with their families in the audience, before being mobbed for autographs and photos.
Hawthorn's Angelo Lekkas was the other current player to make the team. However Geelong midfielder Paul Koulouriotis was presented with the Hellenic Australian Sports Foundation 'Player of the future award.' Koulouriotis is the newest Greek sensation in the AFL. Since breaking into the Geelong side in round 17, he has collected at least 22 possessions in each of his last four games, and been amongst the best on ground. He will be a vital link in the Cats finals assault.

There were surprises in the heritage eligibility of some players. Most notably was the blond hair blue-eyed Russell Morris named at centre-half-back. His great-great-great-great grandfather was Greek. "So I'm Greek!" said the 159 game premiership and all-Australian player. Morris announced that he was even vilified on the field when called a "wog poofter".

Luke Beveridge qualified on the interchange as his grandfather came from Samos.

The Richards' grandfather Charlie Pannam (shortened from Pannamopoulos) was Greek, and six of the family played a record 939 VFL games, kicking 1184 goals and winning 8 premierships between them. Lou was unable to attend the event but his little brother Ron accepted the honour on his behalf. Ron was also named as coach of the 'Greek Team of the Century;' having coached the Magpies reserves to a premiership and being the only undefeated senior coach.

There was another family connection in the team, with cousins George Lakes and Vasil Varlamos being named in the back pocket and half back flank respectively.

Scholarship funds were raised by the auction of many items and memorabilia. One eager fan, believed to be a prominent committee member, bid a total of $12,000 for Pavart paintings of Daicos and Koutoufides plus a signed commemorative jumper.

Sports Minister Justin Madden celebrated the evening with a 'toast to all things Greek', and said he "wouldn't be surprised to see similar nights like this coming out of many other cultural groups, because of the great success that this has been".
One thing is certain; it was Greek footy's night of the century!

Legendary Greek-Australian Athlete Honored with Statue http://au.greekreporter.com/2014/04/23/legendary-greek-australian-athlete-honored-with-statue/ This is a link to an article inThe Greek Australia Reporter on 23 April 2014. Nikoleta Kalmouki reports that 91-year-old former footballer, Lou Richards was recently honored with a bronze statue at Collingwood Football Club’s headquarters and a John Kennedy Lifetime Achievement Award. As indicated in the 2004 article above, Richards family surname is also Pannam or Pannamopoulos.