Photos > Sporting Life > Thorpe's duel out of the pool.

Thorpe's duel out of the pool. 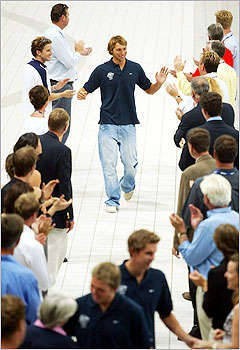 Making waves: Ian Thorpe is congratulated by legends of Australian swimming after the team for the Athens Olympics is announced on Saturday night at the Sydney International Aquatic Centre.

The Manager of one of the greatest swimmers of all time, Australian Ian Thorpe, is a Kytherian; David Flaskas.

He is the international face of the pool deck and the nice guy of sport. But all is not well between Team Thorpe and Australian Swimming with the champion's manager believing his athlete has been treated poorly and is being isolated from his teammates. Roy Masters reports.

A letter that is highly critical of Ian Thorpe's treatment by senior officials of Australian Swimming highlights the pressure the world champion freestyler faces as he prepares for the Athens Olympics and a possible defence of his 400-metre crown.

David Flaskas, Thorpe's long-term manager, sent the letter to the national body one week before Thorpe was disqualified on the first day of the Australian titles that concluded on Saturday night.

Asked to describe the relationship between Team Thorpe and Australian Swimming Inc since the 21-year-old's false start in the 400m, Flaskas offered the neutral word "fine".

ASI president John Devitt said: "We will address it this week, now that the trials are over."

The Herald has learned the letter focuses on two areas in which Flaskas believes ASI failed his athlete, questioning Thorpe's unavailability for a race with American Michael Phelps in Indianapolis in April last year and embarrassing him at the launch of the official Speedo swimsuit last month.

Flaskas concedes he wrote the letter to ASI chief executive Glenn Tasker in frustration following failed discussions with the national body over its treatment of Thorpe, who won three gold medals at the Sydney Olympics.

"I had meetings with Australian Swimming over our disappointment with the way he had been treated over the Indianapolis thing and, after the swimsuit launch, I thought I'd put them on the record," Flaskas said.

"If they're disappointed, they'll put it on the record, too. There was bad judgement shown at the launch and it created pressure at a time no one wanted it."

Flaskas admitted Thorpe, unbeaten in the 400m since 1997, had been under pressure for almost a year, beginning with complaints from senior male swimmers about his unavailability for the "Duel in the Pool" meeting with Phelps.

In recent weeks, the pressure has intensified, with a photographer camped on the water outside Thorpe's new home in Sydney's southern suburbs and speculation over whether Thorpe wants to swim the 400m freestyle in Athens, should AIS swimmer Craig Stevens vacate his place.

Flaskas maintains his only motive in protesting to ASI was to stall a process whereby Thorpe was being "highlighted as bigger than the sport" and "isolated from the rest of the Australian team".

However, ASI sources claim Flaskas's attitude is counter-productive and promotes Thorpe as "arrogant and precious".

It is understood Thorpe initially gained approval not to make the trip to Indianapolis but senior swimmers in the then-male-dominated national team protested this would be the first time a dispensation had been granted to anyone to withdraw.

Following complaints that Thorpe was not perceived to be one of the leaders of the team and under the threat that other swimmers would also withdraw, ASI insisted on a medical certificate from Thorpe.

"I know Thorpe versus Phelps was going to be a big issue at the meet but Ian had a viral infection when he swam in the Australian trials in late March last year," Flaskas said.

"The Indianapolis meet was in early April and he needed a big break in between. In the end, we provided four medical reports that he was too ill to compete.

"Some of the other swimmers thought he should have made the trip and there were suggestions from Australian Swimming he should go.

"Seven or eight other swimmers pulled out. We thought we did it in a professional and dignified way but one swimmer was being portrayed as the whole swim team. It was disappointing and seemed unfair."

Flaskas also cited discriminatory treatment at the world launch of the Speedo Fastskin FS II swimsuit at Fox Studios on March 9. ASI media manager Ian Hanson, acting as compere, asked a question of the American designer of the suit, David Pease, which Flaskas judged a set-up.

Insofar as Thorpe wears a rival adidas suit, the question, "Would Ian Thorpe swim faster in this suit?", did appear to be a Dorothy Dixer on behalf of the sponsor. Predictably, Pease answered "yes" and, although Thorpe was not present, Flaskas was incensed.

Flaskas said yesterday the swimsuit incident was a further example of a process whereby Thorpe, desperate to be seen as part of the team, was being excluded. Last night, a 60 Minutes segment on Channel Nine involving the high-profile members of the Olympic team did not include Thorpe, who is on a contract to Channel Seven, further increasing the perception he is isolated from the rest of the squad.

"Ian doesn't want to be isolated," Flaskas said. "There were four other people who had been nominated for the protocol to be put in place for swimmers to use their own suits but Ian's was the only name thrown up."

AOC president John Coates, anxious to avoid a humiliating process whereby Thorpe could be forced to jump in a pool in front of a squadron of lawyers to demonstrate his suit was "specialist equipment", fast-tracked the protocol.

Coates took the "competitive testing" procedure from the protocol and Speedo objected to his ruling.

The strain on Thorpe is such that his close friends say he may retire from the sport after the Athens Olympics.

Flaskas rejected this, saying: "Things happen in a sporting career but all of our intentions at this stage are to compete in Beijing [in 2008]."

However, observers at the Sydney trials claim Grant Hackett was pushing Thorpe in the 200m, something they had never seen before.

Some people still have reservations about the wisdom of Thorpe having Tracey Menzies as his coach.

Former head men's coach Brian Sutton, left off the team for Athens, has been lobbying the AOC for inclusion, arguing Thorpe needs an experienced sprint coach in Greece. Sutton has positioned himself as a Thorpe ally, walking from the Speedo launch in protest.

Of the possibility of Sutton coaching in Athens, Flaskas said: "I have no knowledge of this."

The implication is Thorpe has not done the work in training to swim the gruelling 400m and, should FINA require Thorpe to provide a time in an event in which he has won an Olympic gold medal, three world championships and two Commonwealth Games gold medals, he would be forced to cite his time in Barcelona in July.

Of Thorpe's recent form, Flaskas said: "Ian swam faster in the 200 metres in Sydney than he did against [Dutchman Pieter] van den Hoogenband in Barcelona [at last year's world championships]."

Still, Thorpe's critics predict Hackett would beat him in the 400m in Athens and suggest the world record-holder may have even been relieved he was disqualified from an event he has called his own.

"If anyone had been in the room when the appeal was turned down and could have seen the disappointment on his face . . . the suggestion is offensive," Flaskas said. "The hurt has really cut deep. To go to Athens as defending Olympic champion in the 400 metres is something everyone would aspire to."