Australia to New Zealand by Kayak - the Route Map 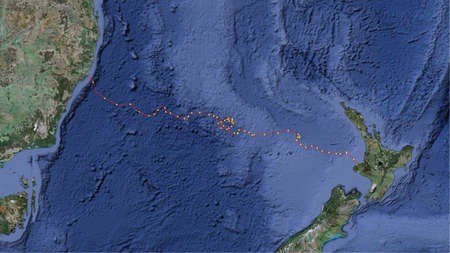 They had kayaked 3318km, braved 10 metre swells, faced howling winds of over 50 knots, endured severe food and sleep deprivation, wasting muscles and adverse winds and currents to become the first kayak expedition across the tasman sea as well as become the longest trans oceanic kayaking expedition undertaken by two expeditioners. Find out how they did this incredible feat!!

Interview with Cas and Jonesy

1. Why did you call the project Crossing the Ditch?

Jonesy –We reckon she’s really really beautiful … bordering on sexy. We firmly believe that paddling the Tasman was an exercise in risk mitigation rather than risk taking and I guess that’s reflected in the craft that we built. We isolated the risks we’d face on the Tasman and built Lot 41 according to that. Sure, she could have been more lightly built, but when it came to having 10metre waves out there crashing on us – I’m glad we decided not to skimp.

The kayak Lot 41 was designed for the trans-Tasman crossing by Rob Feloy, who had designed the kayak for Peter Bray´s trans-Atlantic Crossing approximately six years earlier. The Lot 41 design includes two cockpits, a cabin at the stern of the craft, a large water tank and storage for over 60 days of food for the two kayakers. An array of solar panels was incorporated into the design in order to charge the batteries used to power communication systems, bilge pumps and a water desalination unit. The fibreglass kayak was built in Australia in 2005 and fitted with support systems including emergency beacons, satellite phone, global tracking system, and GPS.

3. What you did was an incredible feat. Did your bodies hate you for it? At any point did you think the physical torture was too heavy a price to pay?

Jonesy – After a week out there, the bodies really started to degrade at quite a fast rate. We developed sores, muscle stripped off us, the joints ached, we were constantly wet and getting bashed around and in the bad storms getting ripped through 10 metre waves we really thought that we’d entered hell but we signed up for this and weren’t going to be detered.

4. With Cas’ seasickness, did it ever occur to you that crossing the ditch might not be the project for you?

Cas – When you work on something so hard and for so long, you really aren’t going to let anything stand in your way. So I went out there and had to find a solution and after 17 attempts at different remedies- Bingo! I settled for some pretty hardcore drugs that they give Chemo patients (valued at 40 bucks a tablet, self hypnosis and accupuncture. That combination made life at sea bearable.

5. One person got very close – Andrew McAuley. Cas, in your book Crossing the Ditch, you’ve talked about nursing a guilty conscience about his failed attempt. Since completing your crossing, have your feelings changed or resolved?

Cas – Andrew was an incredible adventurer who has done so much in the outdoors. We have so much respect for him as a kayaker and expeditioner. It was a real shame that a rivalry popped up between both expeditions. When he disappeared it messed with my mind like you would believe.

Spending 62 days out on the Tasman helped me deal with his dissapearance enormously. I felt Jonesy and I were able to get a tiny glimpse into the suffering Andrew would haver gone through in his voyager- and interestingly, that time out there, semmed to help me make peace with him. I’ve now come to grips with the enormous difference in the trips that we were planning, the different ways and different risk profiles we each had. Jonesy and I can’t hold any responsiblity for the ways that others will act. Beacuase of the profound impact Andrew had on me, I dedicated the book to the memory of Andrew as a sign of the respect and admiration that I have for his amazing attempt.

6. Obviously many months were spent getting boat and yourselves ready for the journey – what would you do differently (if anything) if you had your time again?

Jonesy – Probably pick a better person to paddle with, Cas has the long hair but the curves just aren’t in the right spot!

Cas – Calm down J! In all seriousness, we’d make some minor changes to the hull structure and make the kayak slightly more aerodynamic but not too much more…perhaps paddle from NZ to Australia but we werern’t to know that we’d get a abnormal weather pattern across the ditch.

7. What was the single-most difficult aspect of the expedition? The sores, mental strength, physical labour, planning, surviving each day, or something else?

Jonesy – Of the actual trip, I would really have to say the sleep deprivation…you get so tired that your bones would ache and you’d feel like shit for hours on end. Sure we suffered with sores, the physical toil etc but the tiredness really just added to everything else.

8. Each day you used a Desalinator to convert salt water to freshwater. Did you consider calling the expedition off after your de-sal unit carked it?

Cas – Not a chance, for every bit of critical kit or system we tried to have 2 or 3 levels of redundancy as back up. So when the de-sal broke, we pulled out our manual pump and were resigned to having to pump that by hand for 3 hours a day. It sucked.

9. Were there any moments when you contemplated the possibility of failure – or even the chance that you might not survive the journey?

Cas – Yep the para anchor tangle was one for sure, but there were a couple of other occasions. Stuck in that 2 week whirlpool in the centre of the Tasman, trying to untangle the rudder on another occasion in 10metre waves…all very confronting and you can’t stop negative thoughts popping up. The only thing you can do is trust in the preparations that you have made prior to heading off and our actions and proceedures out there.

10. Cas’s book paints a penetratingly personal picture of the quest. By contrast, the DVD seems a bit ‘lighter’ – was this intentional? Is documenting your excursion in various ways and sharing it with others as important as the mission itself?

Jonesy – A book is the better vessel to really explore the deeper and darker aspect of any expedition. You have alot more time to delve into a number of diifferent themes and do them justice, somthing hard to complete in a 70 minute doco. The doco was deliberately much lighter because this expedition was a success- Cas and I have always been great mates and whenever we’re in the outdoors we’re normally having fun and i guess that was reflected in what we filmed.

11. Jonesy, did you ever use that enormous two-pronged fork your mum bought you for stabbing sharks?

Jonesy – Unfortunately (or fortunately) not! Even on the nights we had sharks grinding up against our hill we never really thought of it as an option. We really took it along solely to placate my mum and it had the unplanned effect of making us smile everytime we pulled it out.

12. Did you have a daily routine and did you ever break it?

Cas – Yep we had a routine that involved getting up at 6am for a sked and then paddled for 12-15hours before retiring into the cabin for a sked, dinner and attempted rest. We varied the schedule when we had to ask dictated by heavy weather.