submitted by Australian Gourmet Traveller on 04.03.2010 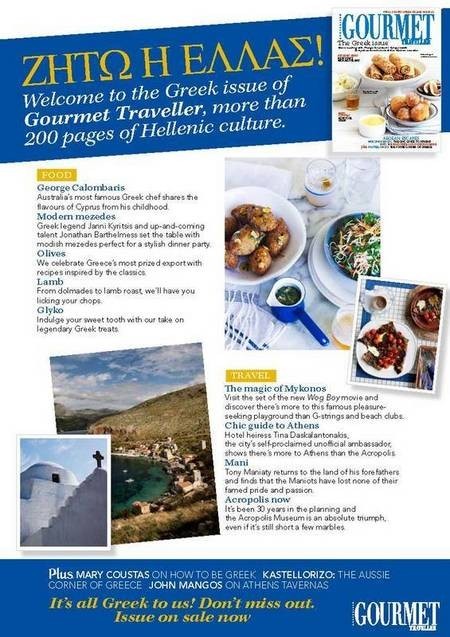 Available: All Newsagencies, and many supermarkets in Australia

I rebelled against being Greek in my teens. I became a goth. My parents indulged me but I’m fairly certain there were a few good-humoured chuckles behind my back at the punkish ‘80s hair, black mohair jumpers, and safety pin-studded trousers. It was a way of distancing myself from the big-haired “Effies” of my high school. But the look didn’t last long, and neither did the disdain for my Greek-Cypriot heritage.

For this special Greek issue, we’ve gathered the best Greek names in the business: Vicky Kyriakopoulos tracks down the Wog Boys on the Mykonos set of their new film, journalist Tony Maniaty returns to the rugged land of his forefathers, Mani, and hotel heiress Tina Daskalantonakis shares her chic guide to Athens.

George Calombaris - the pin-up boy of Greek food — shows us the Cypriot flavours of his childhood, veteran chef Janni Kyritsis teams up with young gun Jonathan Barthelmess to cook up modern mezedes, and the food team revel in olives, lamb and sweets (I’ve given them honorary Greek status).

Conistis, Bolkus, Koutoufides, Paspaley, Kailis, Mangos, Pappas... they’re all here, even Mary Coustas (the most celebrated “Effie” of all), who explains how to be Greek.

Not everyone’s heart beats Hellenic, however. AA Gill, ever the contrarian, always the stirrer, delivers a mischievous and affectionate ode to Greek greatness.

It’s with big, fat Greek pride that we bring you this issue of Gourmet Traveller and we hope you’ll embrace it. It’s been a labour of love.

“The Mani is steeped in authenticity, physically harsh and culturally strange, and full of those unexpected human encounters that are increasingly rare in Europe,” says Sydney-based author and journalist Tony Maniaty of his Greek ancestral homeland. “My advice is to get there quickly before the big money rolls in.” Maniaty, who covered the East Timor conflict in the ‘70’s for the ABC, lectures in journalism. His latest book, Shooting Balibo, is published by Penguin. Read his feature on page 168.

“I first went to Mykonos as a backpacker more than 20 years ago,” says writer Victoria Kyriakopolous, who visited Australia’s favourite Greek island for this issue (see page
152). “Exploring the nuances and diversity of the island to find out why so many people love it and keep going back was a challenge — and a lot of fun.” A specialist in Greece, Kyriakopoulos has covered the country for Lonely Planet and contributed to newspapers and magazines around the world.

“My first night in Athens almost 30 years ago was magical. I fell in love with the place,” says John Mangos. Away from the news desks and studios that have made him a familiar face on Australian television, Mangos’s favourite place is the kitchen, his frequent odysseys through the tavernas of the Greek capital having enriched his culinary repertoire. “The food scene in Athens has become so sophisticated,” he says, “I delight in finding new treasures.” See his guide to city’s best eats on page 78.