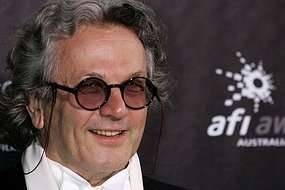 Director George Miller was awarded France’s most prestigious artistic award, the Order of Arts and Letters. Miller received the award, known in France as Ordre des Arts et des Lettres, by French ambassador to Australia Michel Filhol at the opening of the French Film Festival in Sydney on Tuesday night.

The director of iconic films such as Mad Max, Babe and Happy Feet joined an elite group of artists outside France to receive the award, including Martin Scorsese, Clint Eastwood, Robert Redford, Meryl Streep and Steven Spielberg.

The Order of France was established over 50 years ago to recognise people who have made significant contributions to the arts.

Miller was born in Brisbane, Queensland, to Greek immigrant parents: Dimitri (Jim) Castrisios Miliotis and Angela Balson. Dimitri Miliotis was from the Greek island of Kythera and he anglicised his "nickname" to Miller, and adopted it as his surname when he emigrated to Australia; the Balson family were Greek refugees from Anatolia. The couple married and settled in Chinchilla and had four sons. The first two were the non-identical twins George and John, and later, Chris and Bill Miller arrived.

George attended Ipswich Grammar School and later Sydney Boys High School, then studied medicine at the University of New South Wales with his twin brother John. While in his final year at medical school (1971), George and his younger brother Chris made a one minute short film that won them first prize in a student competition.

In 1971, George attended a Film Workshop at Melbourne University where he met fellow student, Byron Kennedy, with whom he formed a lasting friendship. In 1972, Miller completed his residency at Sydney’s St Vincent’s Hospital, spending his time-off crewing on short experimental films. The pair collaborated on numerous works after that.

Miller co-produced and co-directed many acclaimed miniseries for Australian television including The Dismissal (1983) and The Cowra Breakout (1984).

Miller’s role as producer of Flirting, Dead Calm and the TV mini-series Bangkok Hilton and Vietnam, all starring Nicole Kidman, was instrumental in the early development of her career.

Miller was also the creator of Happy Feet, a musical epic about the life of penguins in Antarctica.The Warner Bros. produced film was released in November 2006. As well as being a runaway box office success, Happy Feet has also brought Miller his fourth Academy Award nomination, and his first win in the category of Best Animated Feature.

He is currently working as director for the upcoming film Happy Feet 2. On October 24th, 2009, Miller also confirmed that his next project will be the highly-anticipated third Mad Max sequel, currently titled Mad Max: Fury Road.