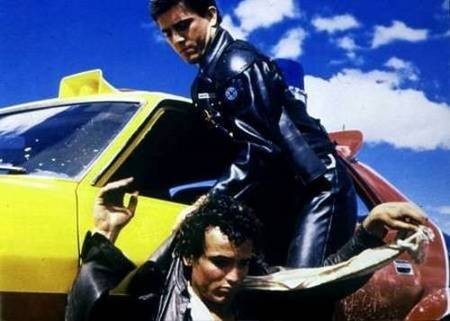 With Mel Gibson playing the role of Mad Max.

"Mad Max 1 was made on an incredibly low budget of close to $300,000 - approximately $15,000 of which went to its inexperienced star - the now legendary Mel Gibson.

"Mad Max is set in a dystopian near-future society suffering from a prolonged fuel shortage. Civil order is rapidly deteriorating and lawless gangs rampage across the desolate landscape, in defiance of the crumbling police force, the Main Force Patrol (MFP).

An escaped cop killer, the Nightrider, is killed during a high-speed pursuit by a young MFP patrolman, Max Rockatansky. The Nightrider's comrades, a motorcycle gang led by the Toecutter, hold Max responsible and kill his partner, Jim Goose, when he attempts to bring them to justice for a violent spree in a small country town.

Distraught at Goose's horrific death, Max walks away from the violence of the MFP and attempts to build a peaceful life with his wife Jessie and their infant son, Sprog.

Meanwhile, the Toecutter is still hungry for revenge for the Nightrider's death.

Max, now resigned from the MFP, is spending time with his family in a secluded beachfront area when the Toecutter Gang stumble across their hideaway. Jessie and Sprog are brutally murdered.

Deranged with grief, Max equips himself with a black supercharged "Pursuit Special" Interceptor and sets out to track down the gang and avenge the deaths of his family."

During the filming of Mad Max, George Miller had to sacrifice his own van to use in a particularly destructive stunt sequence as the group couldn't afford another stunt vehicle. Regardless of these adversities, money would not pose a problem in the company's seminal stage, though, as Mad Max went on to set box-office records around the world, grossing more than Star Wars (1977) in Australia."

Call Sheet, from the first day of filming in Oct 1977

The Kytherian Society of California (KSOCA) Is pleased to invite you to attend our Global Kytherian "ZOOM" III on March 20/21, 2021...

Interviewed by Joshua Kepreotis   After being fed spanakopita and tiropitakia, dipping Karavas’ famous paximathia into Greek coffee and then...

Hi fellow Kytherians, I am a Kytherian (1/2 Dutch) who has never been to Greece but strongly feels the pull...

Thank you to the Kytherian community for supplying me with the name of the father of my...

The Kytherian Society of California is pleased to invite you to participate in our 2nd GLOBAL ZOOM! We are delighted...

Thank you for your reply and details. Appreciate you taking the time to supply this information. Thank...