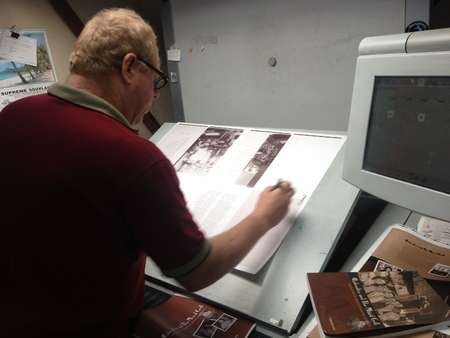 The printing Toni Risson's book, Aphrodite and the Mixed Grill, in 2011 Kytherian World Heritage Fund, (KWHF), a number of challenges.

The KWHF chooses to print its books in China.

The art work for Toni's book was 'set' in sepia - to try and capture the 'old world' look and feel of the Greek & Kytherian - Australian cafe's of the 20th century. CMYK is a four clour print process, which allows little scope for colour variation. To create the sepia look, Toni's graphic designer utilised duo print - a two colour process, which allows a very broad scope for colour variation.

All of the books printed by our Chinese printer arrive as CMYK. The dual colour print set up of "Aphrodite" flumoxed them. We kept sending the file, and a very black, non-sepia look 'sample" book, kept arriving back in Australia. Between sending over new files, and waiting for samples to return, virtually all of 2011 passed by.

The equipment in both KWHF's Chinese and Australian printer is the same. Both use state of the art German Heidelberg printing equipment.

What the Chinese printers failed to do was realise that the two colours - a chocolate brown, and a sepia caramel could be adjusted at the control panel of this very sophisticated Heidelberg printer.

What needed to be done was a number of "press runs" - printing runs. This involves printing off large 16-page print sheet runs - at about 50 sheets at a time - and then adjusting the colours at the control panel. "A little more brown/black on this sheet run...a little less yellow on that one..". The process is one of trial and error. For Aphrodite's 2011 print run in Australia, this process was performed eight times. Eventually, KWHF's graphic designer Mark Drolc, of On the Mark Design, and George C Poulos, "signed off" on the process.

This is the process that needed to be followed in China, but never was.

Eventually, the author and the KWHF decided that despite the additional cost of printing in Australia, if we wanted copies of "Aphrodite" back in print before Christmas, then it had to be printed in Australia.

Thus we experienced, Aphrodite and the Australian printing thrill - the 2011 version.

APHRODITE AND THE MIXED GRILL