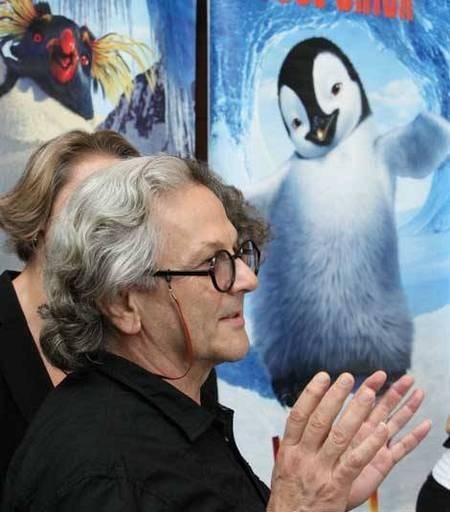 Kytherian, George Miller, at an event to launch the start of filming of Happy Feet 2 in Sydney

Hot and steamy conditions would frighten off most penguins, but not the batch tap-dancing and thumping around energetically in Sydney weather yesterday to give a taste of the sequel to one of Australia's most successful films.

The reason was they hadn't become penguins yet. They were still humans, but clad in all-black bodysuits – covered in what resembled tiny white lightbulbs – that help facilitate the technological wizardry that will transform them into animated penguins for Happy Feet 2.

During filming, "not only do we watch the dancers live, but if I look at the computer they are penguins live", filmmaker George Miller said at the launch of the sequel's production in Sydney's Fox Studios yesterday. "And not only that, they're in Antarctica".

"This is the exactly technology that drove Avatar, that drove Lord of the Rings."

Choosing Sydney to make the film is a boon to the local film industry, which has done it tough in a hard economic climate. The NSW Premier, Kristina Keneally, said the choice was "terrific for our economy, terrific for our film industry ... it's supporting over 500 jobs locally over three years".

Happy Feet, about a tap-dancing penguin who succeeds against the odds, earned about $US384 million at the box office worldwide and won the 2007 Oscar for best animated feature.

Actors Robin Williams and Elijah Wood return as starring voices and both were on site yesterday but behind closed doors. Miller said the movie had "a different story – a lot of new characters".

The filmmaker said the movie industry was moving towards the intersection of arts and technology. Avatar – the biggest-earning film ever, with gross earnings topping $2.1 billion – had "shown us the way. And there's no reason that this can't be done in this country.

"In NSW and Australia I do believe we've been too lazy. We've let others steal the march. And now it's changing."

Miller pointed to what he called "the most advanced motion-capture studio in the world" at the vast CarriageWorks precinct in the inner city suburb of Eveleigh, a new studio reportedly set up under a deal in which Miller's production company leases the premises from the NSW government for a year.

Motion-capture technology enables people's movements to be filmed then fused onto computer-generated characters to enhance their real-life naturalism.

Miller, who came to prominence as the director of Mad Max three decades ago, will also use the studio to work on his planned fourth instalment in the franchise, Fury Road.

"There will be a huge amount of production going through there if we can keep it in this country," he said. "Everyone thought cinema was dead and now we're getting the kind of movies you're seeing now."

Keneally said the state government invested $5.7 million in 34 local film or television projects in the last six months of last year. "That generated $69 million in expenditure – a good return on investment, growing this industry in NSW."