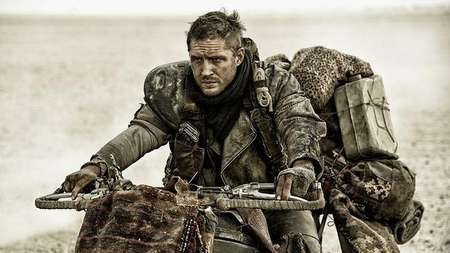 Miller reveals the magic and madness behind Fury Road

Yes, he still wants to shoot the two sequels that were written during the 12 years it took to get that movie to the screen. But it is still too early to say when or even which new instalment – one centring on Tom Hardy's Max, the other on Charlize Theron's Furiosa – he will film next.

"We're certainly talking about them but exactly the timing of that, I don't know," Miller said. "We're still working all that out."

The sequels, which would be shot in Australia after extended rain at Broken Hill forced a shift to the Namibian desert for Fury Road, have been a hot topic since the movie became a rare box office hit, taking $US375 million worldwide, that was almost universally acclaimed by critics.

The fourth Mad Max movie started with an idea that flashed into Miller's head as he crossed a street in Los Angeles in 1998. Then two years later, the former doctor had what he calls a waking dream – with the movie playing out in his head – on a flight from from Los Angeles to Sydney.

Ahead of a talk on creating Fury Road at the Graphic Festival on Sunday, Miller said it grew out of his "strong sense of inquiry".

"One of the things that drew me to this film was the notion of an extended chase and seeing what [viewers] could pick up on the run as it were," he said. "We were trying to put as much iceberg as possible underneath the tip.

"So you read it on the surface as a kind of visual poem but underneath you're trying to pick up as much subtext as possible."
As well as being one of the country's great storytellers – an Oscar winner whose celebrated directing career includes four Mad Max movies, two Happy Feets, Lorenzo's Oil, The Witches of Eastwick and the mini-series The Dismissal – Miller has long been a deep thinker about how stories work and why they matter, drawing on the theories of American mythologist Joseph Campbell.

"One of the major attractions of working in this wasteland world with Mad Max and all his cohorts is that you're going forward to the past," he said. "You're going back to a much more elemental world, which allows you to basically work in allegory.
"So you're drawing on history. You're drawing on present-day events. You're drawing on speculations as to the future we may be heading towards. You're conflating all of those and putting them into the mix and being rigorous about the design criteria that you're working with ... so that even though the movie plays at a helter-skelter pace, [viewers] are picking up enough on the run to make it believable. You hope they're drawn up into the world of the screen without questioning it."

Miller, 70, said "dreaming" a movie was far from rare in his life.
"It probably means I'm crazy but I do it all the time. Ever since I was a little kid, I've been living this imaginative life.
"The more you do something, the more your neurology adjusts to it and I'm pretty well hard-wired for story. Out of habit now, stories are playing in my head all the time."

Every movie Miller has written has come from a similar experience.
"They're not sleeping dreams," he said. "They're what I call hypnagogic dreams or daydreaming – that place between sleep and wakefulness. That unguarded moment when you're in a kind of dissociated state ... It's always in those sort of moments: on a long flight or in the shower.
"I remember having a conversation with George Lucas once and he said just about every great idea he's ever had has come in the shower because you can't be on the internet, you can't be on the phone, you're not watching TV.
"You're just there in that kind of state and the ideas come to your mind."
Miller said it necessarily changed the storytelling in Fury Road when Hardy took over from Mel Gibson as Max in the action series.
"The essential architecture of the story is always going to be there. But the actual tones and colour are going to vary depending on what the actor brings.
"You have something in your mind as you've written or devised it but when it's captured in the camera, that becomes the new reality. That's what you've got to work with.
"It's impossible to know exactly how different it would be but it must be different and pretty soon you've forgotten what you had in your imagination."

After that waking dream one night over the Pacific, Miller and co-writers Brendan McCarthy and Nico Lathouris developed Fury Road in an inventive way. Instead of a script, they created 3500 storyboard panels – effectively comic book scenes – that outlined what happened in the movie shot by shot.

"The task was to see how much story or experience or felt life you could create for an audience during a very fast action piece," he said. "I'm always interested as to how film language is evolving.
"It's an acquired language. It basically laid down its syntax in the silent era. In many ways Mad Max is a silent movie with sound."