submitted by Kytherian Newsletter Sydney on 25.04.2013 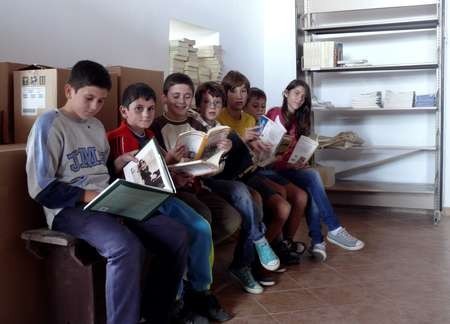 Delightful photograph of the children unpacking the books.

For a few years a small Children’s and Adolescent Library Library operated in Livathi, Kythera. However it closed down in 2011. In 'western' countries such as Australia, America & Canada, and most countries in Europe, Asia, North & South America, all small communities and all small townships maintain a Local Lending Library. There are few towns in the world with a population of 3,300, the population of Kythera that does not have a well established and equipped library. The citizens of a town of this size would consider not having a library unacceptable, and prejudicial to their children's future.

The original Kondelianika School is located just as you turn from the central road in Kythera towards Ayios Elias. (See the map provided). Some years ago the Municipality of Kythera decided to establish a Central Library “re-adapting” the school building. As you can see from the photograph the Library building is substantial, and well maintained. However, there was little funding for shelving and equipment to fit out the library.

Cindy Jarvis (nee Cavalenes), a niece to Spyro Kavallinis and Aryiro Notaras in Sydney, lives in Los Angeles, USA, and works for the city Council in Alhambra, California. In 2011, the Alhambra Council was disposing of a large quantity of library shelving. Cindy took the initiative, secured funding to purchase the shelving, and have it packed and shipped to Kythera by container. Cindy coordinated eight organizations (and their members) including Soroptimist International of Alhambra-San Gabriel-San Marino, Rotary International of Alhambra, KAA, KSOC, KSNY, AHEPA, Daughters of Penelope of Santa Barbara, two companies (providing in-kind assistance) and over fifty individuals (including a film/television celebrity) who donated to the cause. In Australia, the Aroney Trust, KWHF, and KAA also provided valuable assistance. The shelving you see in the photographs is from Alhambra, USA. A surplus of shelving was also distributed to other cultural groups on the island.

In October 2012, a part time Library assistant was provided to Kythera by the Greek Republic’s, Department of Employment. During the time of her tenure many volunteers gathered to organize and assist in establishing the Library. The books from the original Children’s Library were integrated into the collection.

It has been obvious for many years that the Library could be maintained on an ongoing basis, only with the help of volunteers. The Municipality did not share this view. Dimitri Koutrafouris, the young manager of the National Bank in Potamos, using all his patience and diplomatic skills managed to convince the authorities that the volunteer system was the only viable option. The Library volunteers assumed their “duties” on the 27 March 2013. The library will now remain open throughout spring. Opening hours are 4-8 pm every day except Sundays, and the library can be opened in the mornings for school visits by prior arrangement. During summer, opening days will have to be restricted since most volunteers will be busy, but the library administrator’s can still guarantee opening at least 2-3 days out of 7.

Dimitri Koutrafouris, along with John Stathatos have been very ‘hands on’ at the Library. With assistance, they have re-arranged the shelving system to allow more units to fit into the library and increase accessibility (you can see this in one of the photos). They have also arranged the books into a simpler system of decimal cataloguing which they devised and adapted to the needs of the library. The Municipality has also been persuaded to allow a much wider selection of books to be loaned.

John Stathatos is co-founder and artistic director of the Kythera Cultural Association. Co-founder and joint leader of the Kythiraiki Protovoulia (Kytherian Initiative) municipal reform group. Other volunteers who have offered assistance include Eleni Rousketou: Eleni has been very active in a variety of social, cultural and philanthropic fields on the island. She is a key member of the Dramatic Society as actor and writer, and is currently trying to organise free distribution of milk to the kindergartens and primary schools of the island. She has recently been asked to join the governing body of the Kythera Cultural Association. Another active volunteer is Antonis Poulios. He is a young primary school teacher, representing the children’s activities sub-group.

All volunteers, including the children and their teachers have provided invaluable assistance. As you can see from the photographs, the children are thoroughly enjoying their new library, and the facility it affords them to learn and develop.

A first, in the 3,000 year history of the island of Kythera.

Honorary Member of the Friends of Kythera Library