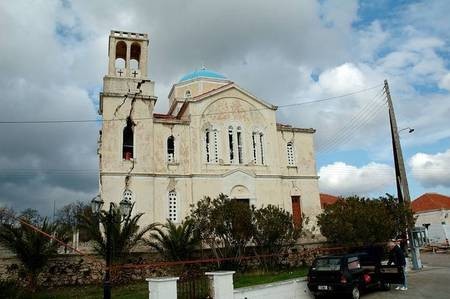 Large rents are evident in the bell tower, and damage to the central section can also be seen; most of the windows have collapsed.

Kythera airport was unusually crowded this morning, with a couple of helicopters including a large Chinook on the tarmac, as well as a four-engined army transport plane which had flown in extra firemen and civil defence personnel. Mitata was also crawling with television crews and their satellite broadcast equipment; the Kythera earthquake, despite the merciful absence of victims, has had a starring role in the Greek media today.

The region’s civil engineers have been hard at work, checking buildings and marking those deemed at risk with a red cross in a circle; almost all the latter were in Mitata, except for a few isolated cases in Goudianika, Potamos and Kapsali. All the affected buildings were unoccupied, most of them for years – a good thing, as the night of Sunday to Monday was bitterly cold; widespread damage leading to the evacuation of homes would have resulted in serious problems.

The most visible damage has been to Mitata church; completely rebuilt after the earthquake of 1903 and recently extensively renovated, it is unfortunately a complete write-off and will have to be demolished. The village priest was allowed in briefly today to recuperate the church vessels, but otherwise the building is strictly off limits. There is already talk locally of rebuilding on a different site, this time well away from the treacherously unstable cliff edge.

The priority now will be on repairs and reconstruction, with the hazardous demolition of the precariously standing church high on the list of priorities. With one eye on forthcoming municipal elections, the regional and central governments have been making positive noises about providing emergency funding. It seems Kythera is fated to live through at least one natural emergency every winter; two years ago it was flooding, last year it was landslides, and now a major earthquake. Thankfully, in all three cases the only victim has been the island’s infrastructure.