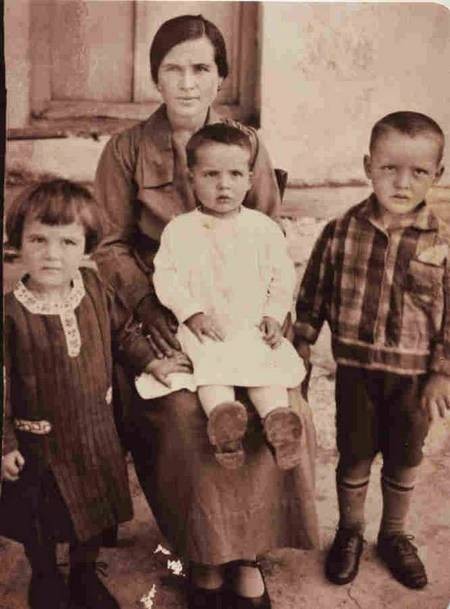 My mother is Envangalia (Angela) Coroneos, originally of Gilgandra, and later of Pendle Hill, NSW. She is sitting on Yeorgia's lap in this photograph.

To the right is her older sister Stamatoula (Toula), later to marry a Vaggis (Vanges) - and to live in Germany for many years. In later life she moved to Australia, where she was tragically killed in a road accident near Bathurst, New South Wales, on the way to visiting her younger brother and sister, Manuel and Voula, in Gilgandra, NSW. She was 49 years of age. Her two youngest sons, George and Nick, then aged 21 and 19, were also killed in the car accident. The date was the 25th December 1975.

On the right hand side is her older brother Theo Koroneos (Corones), later to lose a leg to infection, and become a prominent artist of Kythera. He drove taxi's in Sydney for many years, before retiring to Bargara, in Northern Queensland.

The grande matriarche of Karavas, Louisa Psaltis (nee, Kritharis) [See, People, subsection High Achievers section for details about Louisa's life], was a close friend of Yeorgia Mentis. Louisa described her as the prettiest and most vivacious young girl of her generation.

She died tragically in child-birth whilst giving birth to her 7th child.

This followed a trend in the family - my Great-grandfather Theothosios - also lost his first wife - Zufaria in childbirth. He was so devastated by her death - that he walked away from the house in which they lived - and never returned to it. The house is now iripio - in ruins.

Death during childbirth was common in Kythera during the 19th and early 20th century. It is a theme which demands far more attention on kythera-family.

Other Photographs of Theo

Theo, later life, in retirement in the North Queensland coastal village of Bargara

Other photographs of Angie

Angie at age 12, with her mother and 5 brothers and sisters

Angie in a Wyong, NSW, orchard, newly arrived from Kythera

Angie Poulos on her on her wedding day

Angie at age 32, taken in 1960, alongside her other 5 Koroneos brothers and sisters who had subsequently emigrated to Australia
The history of the Kytherian presence in Gilgandra, where Angie lived for a quarter of a century